Bulbasaur​ (フシギダネ, , Fushigidane?) is one of the original 151 Pokémon that first appeared in Pokémon Red Version & Pokémon Blue Version. It is a more popular Pokémon among the others, due to being one of the first three starting Pokémon that the player can choose from when beginning a new game.

According to Pokédex entries, Bulbasaur's bulb is planted at birth, not born with it naturally. The bulb also stores energy from the sun, which allows Bulbasaur to go without eating for days.

Bulbasaur's name originates from bulb and -saur, meaning "lizard". Its Japanese name, Fushigidane 「フシギダネ」 is a pun meaning both "Isn't it strange?" and "strange seed". As one of the three examples of the "more popular Pokémon", it is noted as "Fushigidane, a dinosaur with a green garlic bulb on its back, became Bulbasaur"

Bulbasaur made their first video game debut on February 27, 1996 in the Japanese video games Pokémon Red Version and Pokémon Green Version (in other countries, Bulbasaur debuted with Pokémon Blue Version and Pokémon Red Version).[1] Along with Charmander and Squirtle, it is one of three starter Pokémon available at the beginning of the video games. Bulbasaur's Grass type is in contrast to Charmander's Fire type and Squirtle's Water type.

In Pokémon Yellow Version: Special Pikachu Edition, Bulbasaur and the other starters from Pokémon Red Version, Pokémon Blue Version, Pokémon Green Version, and the Game Boy Advance Generation II remakes Pokémon FireRed Version and Pokémon LeafGreen Version are replaced by Pikachu, which is the only starter Pokémon available. Instead, these Pokémon are obtained throughout the game from various trainers. The Nintendo 64 spin-off Pokémon Stadium, and other spin-offs such as Pokémon Mystery Dungeon give the player a choice of a Bulbasaur (among 15 others), and in Pokémon Snap, Bulbasaur is one of the Pokémon that the player can take a photograph of.[2] Bulbasaur also make appearances in Hey You, Pikachu! and Pokémon Channel. In Super Smash Bros. Melee, a Bulbasaur appears as a trophy in a lottery, which the player may participate in by using a currency known as "Smash Coins".[3]

The only way to get Bulbasaur in Pokémon Red Version & Pokémon Blue Version is to choose it as your starting Pokémon. Professor Oak will let you choose between it and Squirtle and Charmander at the beginning of the game. If you pick Bulbasaur, your rival will automatically pick Charmander.

Bulbasaur can be obtained from the woman in Cerulean City (in the house next to the Pokémon Center) after completing the following tasks:

Go into the house. Talk to the Oddish, Sandshrew, and Bulbasaur. Then, talk to the woman next to Bulbasaur. She will ask you if you want her Bulbasaur. Answer yes, and it's all yours.

Bulbasaur is yet again a starting Pokémon in Pokémon FireRed Version and Pokémon LeafGreen Version. Just like the first time, you can only get it by choosing it as your starter.

Bulbasaur can be photographed at the River. In addition to the two in the tree trunks, there is another hidden in a nearby log. Throw an apple or Pester Ball near the log's opening and it will come out.

Also, the three Bulbasaurs at the beginning of the Cave are really Dittos. However, if you take photos of them in while transformed as Bulbasaurs, they count as Bulbasaurs.

Choosing Bulbasaur would give a beginner player a leg-up in the beginning of Red/Blue, due to Bulbasaur's type strengths against most of the Pokémon encountered at the beginning; Brock and Mt. Moon's Rock-types, Misty's Water-types, and Lt. Surge's Electric-types all have a disadvantage against Grass-type Pokémon.

However, Bulbasaur and its evolutions are at a considerable disadvantage to Charmander and Squirtle (and their subsequent evolutions) due to its second type, Poison. Second types can be an advantage, giving the Pokémon another type to receive a STAB boost from, but the only Poison-type move that Bulbasaur and its evolutions can is Poison Powder; TMs are required to learn other, more useful Poison attacks. Also, because of the additional Poison type, Bulbasaur is weak against Psychic Pokémon, which is a disadvantage that stings particularly bad in Pokémon Red Version o& Pokémon Blue Version, thanks to the somewhat imbalanced type hierarchy; having your starter Pokémon take additional damage from an already overpowered group of Pokémon can become very exasperating.

The Pokémon anime series and films are a set of adventures separate from most other versions of Pokémon, featuring Ash Ketchum as the main character, and following his quest to become a Pokémon Master. He and his companions travel around the Pokémon world battling other Pokémon Trainers. To this end, Ash and his friend May have each trained a Bulbasaur (at different times), although Ash’s was featured for a much longer period.

Ash’s Bulbasaur has remained with him longer than any of his other Pokémon with the exception of his Pikachu, the first Pokémon on his team, and was portrayed as brave but very stubborn. Before joining his team, it lived with a girl named Melanie, who took care of abandoned Pokémon. It is unclear whether or not this Bulbasaur had been abandoned, but Melanie was not its Trainer; she was merely a friend. Originally, this Bulbasaur was pessimistic about Ash, and when it and his other Pokémon were separated from him, it insisted to the other Pokémon that he had abandoned them. However, following this episode, its loyalties began to improve and it eventually became one of Ash’s most faithful Pokémon.

Ash and his early companions were the first humans to witness a Bulbasaur evolution ceremony, in which all the Bulbasaur in the world gather in one place in order to evolve into Ivysaur. In this episode, Ash's Bulbasaur decided not to evolve. Although this decision was not accepted by other Bulbasaur at first, they eventually came to respect its wishes.

During the grass field battle of the Indigo League tournament, a battle competition that takes place on the Indigo Plateau, Ash’s Bulbasaur defeated two of the opponent’s three Pokémon (a Beedrill and a Scyther), despite the fact that both of those Pokémon have a significant type advantage over Grass-type Pokémon like Bulbasaur. It also took part in the Orange League Tournament; however, it was quickly defeated by a more experienced Electabuzz, making it the only Pokémon of Ash’s team not to defeat any of the opponent’s Pokémon during that tournament. Later, in the Johto League Silver Conference, Bulbasaur was able to defeat a shiny Magneton, and then in the same match, duel a Meganium to a draw.

As in the video games, Pokémon Trainers can only carry a maximum of six Pokémon in their active roster at any one time. Ash’s Bulbasaur remained on his active roster for much of the series, but was later left with Professor Oak, after other Pokémon in Professor Oak’s care started fighting amongst themselves. Bulbasaur was the only Pokémon able to break up these fights, and the fights would resume if it were to leave. During Bulbasaur's stay with Professor Oak, it saved an Oddish and avoided a boulder by using Dig (a move which Bulbasaur cannot learn in the video games.)

Another featured Bulbasaur is the fourth Pokémon caught by May during her Hoenn adventures. While traveling in the Forbidden Forest (a Grass Pokémon reserve), she finds it trying to pick flowers. It warms to her and defends her against the other Grass Pokémon, who see her as a threat. When May leaves, Bulbasaur decides to go with her. Like May’s other Pokémon, it is a contest Pokémon. Pokémon Contests within the series are dog show-type events in which Pokémon compete to demonstrate style to a panel of judges. For this reason, it is taught the Petal Dance attack, a flashy move which garners high scores from the judges. May's Bulbasaur has a heart-shaped marking on its forehead.

Since May's Bulbasaur fell in love with Ash's Bulbasaur, both Bulbasaur are now with Professor Oak.

Other Bulbasaur include one that used to belong to the mayor of Trovitopolis City in Episode 102 ("The Mystery Menace"). During his childhood, the mayor had abandoned the Bulbasaur and sent it into the sewers when it would not evolve into Ivysaur. Aided by his friends, Ash found the abandoned Bulbasaur while searching for his own Bulbasaur. After defeating the mayor and his personal SWAT team, Ash and company left the abandoned Bulbasaur with Nurse Joy at the end of the episode. In the Pokémon Chronicles episode "Journey to the Starting Line", Gilbert, the son of Pallet Town's mayor, selected a Bulbasaur to be his Starter Pokémon

Bulbasaur is also featured in several Pokémon manga. In Pokémon: Pikachu Shocks Back, Electric Pikachu Boogaloo, and Surf’s Up, Pikachu!, which loosely parallel the storyline of the anime, Pikachu is separated from Ash temporarily and travels with a Bulbasaur to a secret Pokémon village in the mountains. Later, Ash has caught a Bulbasaur of his own, which he uses in its first appearance to battle Team Rocket. While Ash and his companions take time off to work odd jobs, his Bulbasaur challenges an Ivysaur’s belief in a guardian Venusaur spirit, and the two scale an enormous, ancient tree to settle the matter. Bulbasaur accompanies Ash throughout his journeys in the Orange Islands, and eventually fights in the final showdown with Drake, the Orange Crew Supreme Gym Leader. In Magical Pokémon Journey, a character named Pistachio has a female Bulbasaur (nicknamed “Danerina” in the Japanese version), who is infatuated by him.[4]

In Pokémon Adventures, a manga based on the original games, Red receives a Bulbasaur from Professor Oak, which he nicknames "Saur." Red is one of the player names that can be autonatically selected by the player for the avatar used in Pokémon Red Version. It is one of the optional names selected at the beginning of the game. (Chapter 1, "VS. Mew").[5] In Chapter 15, "Wartortle Wars", it evolves into an Ivysaur after battling a wild Mankey.[6] In Chapter 30, "Zap, Zap, Zapdos!", Red uses Saur to defeat Lt. Surge's Zapdos, using its Razor Leaf attack to cut the cables that join the Team Rocket Executive and the legendary bird.[7] In Chapter 33, "The Winged Legends", Red's Ivysaur evolves into a Venusaur to team up with Blue's Charizard and Green's Blastoise, Turtley, to defeat Sabrina's Zapmolcuno (a merged form of Zapdos, Moltres and Articuno) and destroy Team Rocket's control on Saffron City, splitting the three birds in the process.[8] 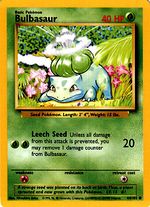 Bulbasaur in the Pokémon Trading Card Game (Base set)

The Pokémon Trading Card Game is a collectible card game similar in goal to a Pokémon battle in the video game series; players must use cards (with individual strengths and weaknesses) in an attempt to defeat their opponent by "knocking out" all of his cards.[9]

In this capacity, Bulbasaur was among the first Pokémon cards with which players became acquainted with when the game was released in October of 1996. Bulbasaur cards have appeared in the Base Set (and Base Set 2 and Legendary Collection), Gym Challenge (as Erika’s Bulbasaur), Expedition (two cards), EX Team Magma vs. Team Aqua, and EX FireRed & LeafGreen (two cards). Bulbasaur had relatively few appearances in the early card series. In particular, the Rocket set contained Charmander and Squirtle cards, but no Bulbasaur.[10] Bulbasaur made more frequent appearances in the later expansions, starting with the Expedition set. Most Bulbasaur cards are of the “common” frequency (see image) and can generally be found with relative ease.[11]

OVERGROW
Battle: When HP is below ⅓, the power of Grass-type moves increasesby 50%.
Field: N/A