Bulletstorm is a 2011 first-person shooter video game developed by People Can Fly and Epic Games, and is published by Electronic Arts for the PlayStation 3, Xbox 360, and Microsoft Windows. The game was released on February 22, 2011 in the US, and on February 25, 2011 in the UK.

Bulletstorm takes place in the 26th century, where the Confederation of Planets are protected by a secret black-ops army called Dead Echo. The story follows space pirate Grayson Hunt, voiced by Steve Blum, and his cyborg partner Ishi Sato, whose squad went AWOL after discovering that they were tricked into killing innocent civilians, instead of the ruthless drug dealers and mass murderers that their commanding officer General Sarrano told them they were killing.

Ten years later, after a spontaneous and liquor-induced attempt to take revenge on the General and his forces, Hunt's and Sato's ship crash-landed on the planet Stygia, a former resort planet now overrun with meat-eating plants, feral mutant tribes, criminals, and Godzilla-sized monsters. After waking up, Hunt is told by the ship's doctor that Sato is gravely injured, and he requires an energy cell to power the surgery equipment needed to save him. Hunt and his comrade Rell goes off to retrieve an energy cell from a fallen escape pod, and makes it back to the ship to deliver to the doctor. The doctor successfully merges Sato's brain with the ship's AI in order 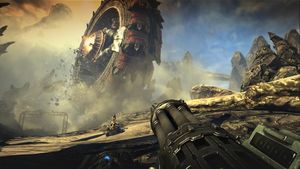 to preserve his life. However, at the end of the procedure, bandits break into the ship through the air vents and kill the doctor. Hunt, who is dazed, takes a gun lying near him and shoots an explosive barrel that Rell was holding, killing Rell and the bandits in the room and knocking himself and Sato unconscious. When he wakes up, he sees Sato lying against a rock, and the two decide to work together to survive, despite Sato's anger at Hunt for endangering and killing most of the crew as a result of his liquor-induced thirst for revenge.

Hunt and Sato search for a way off the planet, all while doing battle with the General's forces, who also crashed on Stygia after Hunt's attack. Along the way, they are joined by Trishka, a foul-mouthed woman with a dark past who also knows her way around a gun. Hunt, Sato, and Triska continue towards Sarrano. The trio confronts Sarrano on a collapsing building, where he pushes Trishka off. Sarrano tells Hunt that there is an armed DNA bomb in Sarrano's ship, which will exterminate all life in Stygia. Sarrano, Sato, and Hunt make their way to the ship. Hunt reveals that Trishka was the girl they rescued ten years ago, after assassinating her father, an innocent reporter by the name of Bryce Novak.

Upon arrival to the ship, Sarrano tricks Hunt into arming the bomb. Hunt and Sato are rescued by Trishka, who caught on to a wire to survive. They then make their way to Sarrano. Trishka holds Sarrano at gunpoint, and demands to know if he ordered her father's assassination. Sarrano tells her Hunt pulled the trigger, and while Hunt and Trishka are distracted by this revelation, Sarrano takes control of Sato's AI. Hunt is able to help Sato break Sarrano's control. Sato sacrfices his life for Hunt, who then seemingly kills Sarrano. With his dying breath, Sarrano ejects Hunt, Trishka, and his men back in onto the surface of Stygia. Sarrano's men and the duo race to Sarrano's ship, where there are still some escape pods. Trishka and Hunt beat Sarrano's squad, and escape before the bomb goes off. The ending reveals Sarrano is now a cyborg like Sato and that Sato has been revived, although under Sarrano's control.

Players use a sizable arsenal consisting of over-the-top combat moves and large weapons.Bulletstorm also has a variety of "skillshots". The skillshot gameplay system rewards the player for creating and inciting mayhem in the most creative and destructive ways possible, from killing an enemy in midair to pushing an enemy into a carnivorous plant to executing an enemy after shooting him in the testicles. The more unusual the skillshot, the more points players acquire to upgrade their character and unlock weapons. If these creative moves are repeated, the player character can "max out", meaning the character will gain more skillshots and one shot kills, allowing the player to perform even more creative moves and exaggerated skillshots. 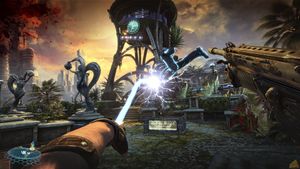 Points are used as currency at "dropkits" scattered across the planet, which the player can use to replenish munitions. The dropkits include a gun shop, a skillshot checklist, and gameplay statistics. The player cannot upgrade their weapons, but can equip different guns, purchase ammunition, upgrade the amount of ammunition they can carry, and even purchase special-ammunition "charges". The player can equip up to three weapons, the assault rifle being the default weapon; it is always equipped, and is considered the main prop weapon in cutscenes.

The weapons range from a pistol to a cannon that shoots two grenades connected by chain that wrap around an enemy or piece of environment before detonating. Each weapon has an "alternate fire" mode which uses charges; for example, the assault rifle's alternate fire is a single blast of bullets that destroy almost everything in its path. A device the player carries for most of the game is the "energy leash", a rope of energy projected from a device on his left hand. The leash allows him to pull enemies towards him, activate certain devices and traps, and slam down a ball of energy that launches all nearby enemies into the air. The player can also kick enemies and run and slide into them. Usually, when an enemy is launched into the air by the player, their descent is slowed down by the leash's energy when grappled or by the gravity boot when kicked. This allows the player to pull an enemy into kicking range with the leash, aim at something dangerous, and kick.

Development began in June 2007. In 2008, Electronic Arts announced that it would be publishing a new IP from independent game developer Epic Games. A trademark for the name "Bulletstorm" was revealed when game developer People Can Fly filed a trademark for the name in December 2009. Epic Games designer Cliff Bleszinski was originally scheduled to announce the game alongside Gears of War 3 during an appearance on Late Night with Jimmy Fallon on April 8, 2010. However his appearance was delayed to April 12, 2010 after his slot was taken by pop singer Justin Bieber. Soon after Bleszinski announced on social networking website Twitter that he would be announcing two games on the show on April 12, 2010. However, the game was revealed before the scheduled appearance when gaming magazine, Game Informer, released its May 2010 issue cover which revealed the game.

On December 17, 2010, two months prior to its release, Epic Games announced that there will be a limited edition for Bulletstorm exclusively for Xbox 360 known as the Epic Edition. TheEpic Edition includes bonus in-game content for Bulletstorm when playing online, including 25,000 experience points, visual upgrades for the leash, Peace Maker Carbine, boots and armor as well as access to multiplayer beta of Gears of War 3.

On January 14, 2011, Electronic Arts announced that a demo of the game would be available on January 25, 2011 for the Xbox 360 and on January 26, 2011 for the PlayStation 3. No demo was announced to be planned for the PC, which was described as odd by some reviewers, especially for an unproven video game franchise. It was remarked that Mark Rein, president of Epic Games, previously described Bulletstorm as "a full-blown, oh-my-god amazing PC game". Following this announcement, Cliff Bleszinski, producer for the game, wrote a tweet on January 14, 2011 about how the demo was only for PlayStation 3 and Xbox 360, which was considered by game reviewers as a way of making fun of PC players. Both Mark Rein and the official developer blog has later stated that a PC demo will still happen. The PC demo was finally released on April 4, and featured the same level as the console versions.

On January 30, 2011, Destructoid discovered that the Electronic Arts disclosure page for the game announced that a permanent internet connection was required to play. Adrian Chmielarz, a designer at People Can Fly, denied it on his Twitter page.

Game Informer's Tim Turi gave Bulletstorm a 9.25/10, praising the game's degree of character control, which he compared to Mirror's Edge. He also praised the game's darkly humorous storyline, calling it a "goofy sci-fi romp that doesn't deserve to have its cut-scenes skipped," and also liked Bulletstorm's complex Skillshot-based combat and weapons system, praising them as very creative. However, he criticized the game's lack of multiplayer maps and the final hours of the campaign, calling it "stale". Eurogamer synthesis of the game was that it was "an astonishingly clever game folded up inside an exquisitely stupid one".

However, several reviewers criticized the game design. For example, 1UP and The Escapist judged that the plot was overly serious considering the focus put by the designers on the gameplay, "dragging the game down." Others considered that the multiplayer part of the game was limited and "gets tiresome". NoFrag found the plot fairly conventional and the dialogues not really funny, and the end of the solo campaign "sugary" contrary to the developers which said that the game was not taking itself too seriously. The game was also using too many quick time and scripted events for their liking, often breaking the flow of the gameplay.

On February 20, 2011, the game came under scrutiny by Fox News. The game was targeted because of its profanity, crude behavior (examples of which including the game's skill-shot system, which has a move that rewards players for shooting at an enemy's genitals), and sexual innuendo. Alongside the panel of Fox News anchors was a psychiatrist by the name of Carole Lieberman, who remarked: "Video games have increasingly, and more brazenly, connected sex and violence in images, actions and words. This has the psychological impact of doubling the excitement, stimulation and incitement to copycat acts. The increase in rapes can be attributed, in large part, to the playing out of such scenes in video games." Other claims include that the game could reach audiences as young as nine years old, and that the gore and profanity could seriously traumatize a child of that age group. Another argument was offered by a University of Maryland professor, Melanie Killen, who claimed that the gameplay videos were targeted towards "young adolescents and children."

EA responded to this argument: "As you know, Bulletstorm is a work of entertainment fiction...The game and its marketing adhere to all guidelines set forth by the ESRB; both designed for people 17+...Much like Tarantino's Kill Bill or Rodriguez's Sin City, this game is an expression of creative entertainment for adults."

Hal Levy of the National Youth Rights Association said that the game promotes innovative thinking through dispatching enemies in unique ways, and that "Plenty of emotionally unstable adults will play the game and they’ll be fine."

No action was taken by the respective developers, producers, distributors, or the ESRB.