Burnout is a series of high-speed racing games for the PlayStation 2 and PlayStation 3, PlayStation Portable, Xbox, Xbox 360, Nintendo DS, PC, and GameCube game consoles. The first Burnout Game to be announced for release on PCs is Burnout Paradise: The Ultimate Box, which is due out in February 2009. The game series was developed by Criterion Games and published by Acclaim (the first two games and EA (all of the remaining games. The original Burnout and Burnout 2: Point of Impact drew critical acclaim and a large fan base in Europe, as well as an underground following in the US. However, it was not until the release of Burnout 3: Takedown that the series would earn mass recognition by the US gaming media.

This series is well known for its emphasis on aggressive driving and high sense of speed. In-race rewards are given to the player if they take risks such as driving towards oncoming traffic or deliberately attempting to make their opponents crash. In Burnout 3: Takedown the latter action, referred to in game as a Takedown, was showcased extensively and gave perhaps the most extensive rewards when successfully performed.

It was not the racing element of the game but the slow motion replays of crashes that show the cars being deformed realistically that brought Burnout to the attention of the public. Criterion picked up on this and introduced a special Crash Mode as part of Burnout 2. In this mode players are instructed to cause as much damage as possible by crashing their vehicle into traffic in a specially designed level featuring "crash junctions", areas where a large amount of vehicles are passing by (such as a highway). During these events, traffic is constantly the same, utilizing a strategic method to succeed. It also introduced a Pursuit mode, where the player drives a special police car and must chase down a speeding racer and stop them before the race course ends. This mode was discontinued due to it not fitting in with the series, but was featured in Burnout Legends.

The takedown element of Burnout 3: Takedown is what differentiates it from other racing games. It is an essential strategy for winning races, especially in single player. There is also a Road Rage mode in which the object is to takedown as many opponents as possible. Burnout Revenge was released on September 13, 2005 for Xbox and PlayStation 2. This game made it possible for the player to hit same way traffic cars without crashing, and to use them to try to take down rivals (called Traffic Checking). Burnout Dominator was announced on December 5, 2006, only to be released for the PlayStation 2 and the PlayStation Portable and without the inclusion the crash mode from the previous game. Dominator mainly focuses on the original game's Burnout, which is using up the entire boost meter non-stop and trying to chain boosts as long as possible.

Burnout Paradise was released in January 2008, for the Xbox 360 and PlayStation 3. This new Burnout game had new features such as its open world gameplay, where you could explore Paradise City at your leisure and initiate at any marked intersection. It also introduced a feature that takes a mugshot of you using the Xbox Live Vision camera or PlayStation Eye and sends it to the person that took you down.

With a successful release of Burnout Paradise, Criterion Games decided to continue supporting Paradise with updates to provide a steady flow of content for continued players of the game. Those already released are Cagney which provided new vehicles, new challenges, new online game modes, and a custom soundtrack feature for the PlayStation 3 version. The Burnout Bikes Update introduced four motorbikes, time trial events for the bikes, and a day/night cycle. An update for the PlayStation 3 patched Trophy Support into the game. Expected for release early in 2009 are an added island for gameplay and Party Gameplay support.

Burnout Anthology was released on November 19, 2008, for the PlayStation 2 in the United States only. It is the repackaging of Burnout 3: Takedown, Burnout Revenge, and Burnout Dominator for a discounted price.

Burnout Paradise: The Ultimate Box has been announced for release February 2009. It will feature all of Burnout Paradise's content and gameplay and all of the updates up to that point all packaged together in one box. It will be released for the PlayStation 3, Xbox 360, and be the first Burnout game to be released on the PC.

Burnout originally featured a small collection of cars, including the small Compact, the Saloon (as well as a sports-modified GT version), the Pickup and the Muscle. This collection grew in Burnout 2 to include cars such as the Oval Racer, the Cop Car, the Classic, The Gangster and the Hot Rod. Once Burnout 3: Takedown was released, the original cars were no longer used, with the exception of the Custom Coupe Ultimate, a lime green Coupe that was one of the "Custom" cars in Burnout 2 (this car also reappears in Burnout Dominator). The same happened in Burnout Revenge where the car collection was entirely new. For the most part, Burnout Paradise's car collection is all new but there are some vehicles (such as the aforementioned "Custom Coupe Ultimate" and the Custom Roadster from Burnout 2 or the Revenge Racer from Burnout Revenge) that are models from previous Burnout games. Paradise is also the first Burnout game to designate manufacturers and real car model names for its vehicles (such as the Carson Annihilator or Nakamura Ikusa GT). 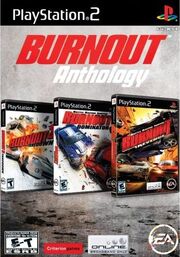