Carl "CJ" Johnson, born in Los Santos, San Andreas, is one of the leading members of the Grove Street Families, along with his brother, Sean "Sweet" Johnson. Sweet suggested that CJ was born in the Johnson House, a two floor home at a Grove Street cul-de-sac in Ganton, Los Santos. After the death of his younger brother, Brian, Carl escaped the pressures of gang life and moved to Liberty City in 1987, where he had the opportunity of working with Don Salvatore Leone's son, Joey Leone in the car theft business, and is once seen mugging a passer-by on the streets in Liberty City. GTA San Andreas begins with CJ's return to Los Santos upon the death of his mother. It is supposed that CJ has been based on various well-known rappers such as Dr. Dre.

In 1992, CJ receives a phone call from Sweet on the death of his mother and returns to Los Santos, only to be confronted by members of C.R.A.S.H., consisting of officers Frank Tenpenny, Eddie Pulaski and Jimmy Hernandez. Throughout the storyline, CJ is forced to work for C.R.A.S.H., after learning that he has been framed by the organization for the murder of an Internal Affairs police officer called Ralph Pendelbury, whom C.R.A.S.H. members had also silenced to prevent him from exposing the team's activities. Interestingly, CJ's appearance at the beginning of the game is similar to Chris Tucker's character in the film "Money Talks".

Early in the game, CJ aids all the senior members in reviving the Grove Street Families, by killing crack dealers in the neighborhood, acquiring firearms and regaining gang territory. Carl also does some work for C.R.A.S.H. to keep Tenpenny off his back. Due to Carl's work, Grove Street is nearly brought back to its feet. However, all the effort comes to an end when Varrios Los Aztecas leader and close friend, Cesar Vialpando calls CJ and they find out that two of the senior Grove Street members, Ryder and Big Smoke, have betrayed the gang to change side with the Ballas and C.R.A.S.H., while Sweet is ambushed and wounded by rival Ballas gang members in a shootout under the Mulholland Intersection. This leads to Sweet being arrested by the police. CJ manages to save Sweet from dying but is also arrested once the police raid the scene. CJ and Sweet's arrests also leads to the downfall of the Grove Street Families as well as Cesar's Varrios Los Aztecas which results in total domination of Los Santos by the Ballas and Los Santos Vagos.

C.R.A.S.H. releases CJ from being arrested in order to perform another job for them. They leave CJ in Whetstone to eliminate a witness against them. CJ, later on, starts committing a series of robberies along with Catalina, Cesar Vialpando's cousin, the heist targets include a betting shop, a liquor store, a gas station and a small town bank. CJ meets Triad leader Wu Zi Mu "Woozie" during a street race and aging hippie The Truth through Tenpenny. Catalina ditches CJ for her next boyfriend, Claude, and in another street race CJ beats them, gaining the deed to Claude's run down garage in Doherty, San Fierro. Carl prepares to leave the Badlands after helping The Truth burn down his cannabis crops because of the police discovering the farm.

Once CJ arrives in San Fierro with Cesar, The Truth and Kendl, he discovers that the garage he won from Claude is completely useless. Due to Kendl and The Truth's suggestions, he hires Dwaine, Jethro and Zero to work in the garage. CJ re-encounters Woozie in San Fierro and he explains, after a little recon, who the drug dealing organization, the Loco Syndicate are. Woozie hires CJ to help him sort things out with the Triads' enemies, the Da Nang Boys. CJ infiltrates the Syndicate through one of the members, Jizzy B and assists T-Bone Mendez and Mike Toreno run their drugs in an attempt to learn about a big deal between them and the Ballas. After gaining trust from the group, Carl kills Jizzy, then Mendez and apparently Toreno as well as former friend Ryder in a big shootout down at Pier 69. CJ, later, blows up Big Smoke's huge crack factory in Doherty. CJ succeeds in making his garage into a successful business and illegal car shop with the help of Cesar and his friends. After sorting everything out in San Fierro, CJ receives an anonymous phone call from a man using a voice distortion, who offers a way to release Sweet from jail, CJ then travels to the desert, to a ranch in the middle of Tierra Robada.

Upon arriving at the ranch in Tierra Robada, CJ discovers it's Mike Toreno who called him there, and he believes Toreno will kill him, so CJ doesn't let Toreno explain himself, Toreno snaps and in a fit of rage yells out he isn't a drug dealer, but a government agent. Toreno has CJ to buy the abandoned airstrip, Verdant Meadows, near Las Venturas and orders him to perform near impossible tasks, such as shooting down FBI helicopters from a plateau to protect a drop off chopper, dropping goods from an airplane to Toreno's helpers in Angel Pine while flying below the radar level and riding a motorbike into an airplane and setting off a bomb inside it after jumping off the plane in a parachute. After this, Toreno leaves CJ without fulfilling his promise of having Sweet released. An angered CJ then decides to sabotage Toreno by pulling jobs for The Truth, like robbing a jetpack from Area 69 and stealing some green goo from a government train. After finishing the jobs for The Truth, Wu Zi Mu calls CJ to his casino, The Four Dragons Casino in Las Venturas.

Upon arriving in Las Venturas, CJ gets a share of Woozie's new casino, The Four Dragons Casino, and helps Woozie deal with the Mafia Families trying to sabotage the casino. He starts planning a heist on the Mafia-run Caligula's Palace along with Woozie. To do this, CJ starts working for Salvatore Leone, even taking a short trip to Liberty City, for his trust and easy access to the casino. While planning the heist, CJ saves the life of rapper Madd Dogg, partly because he had sabotaged the rapper's career to launch OG Loc's. After saving his life, CJ becomes Madd Dogg's new manager. In the process, CJ helps Ken Rosenberg, Kent Paul and Maccer fake their deaths so they can stop working for Salvatore Leone. Finally, CJ retrieves a dossier for Frank Tenpenny, witnesses the murder of C.R.A.S.H. agent Jimmy Hernandez and kills another C.R.A.S.H. agent, Eddie Pulaski. After CJ and the Triads pull the heist, Carl flies back to Los Santos and helps Madd Dogg take back his mansion from Big Poppa and Los Santos Vagos.

When CJ gets back to Los Santos, he helps Madd Dogg get back his rhyme book from OG Loc and also helps him start his career again. While CJ is listening to Madd Dogg rapping at the studio, Mike Toreno hacks into the house's P.A. system and tells CJ about a final job. Toreno says the job is very easy and reveals that the task is to sneak into a military ship, steal a Hydra assault plane, and use it to blow up four spy ships. After pulling the job, Mike leaves Carl to take care of the plane. Later on, Toreno returns to CJ and asks him for a "final job", CJ then snaps and puts a gun against Toreno's head. Toreno calmly tells CJ that he's "embarrassing himself" and mentions a "surprise". The phone rings and CJ answers, it's Sweet and he has been released from prison and the final job was actually to pick him up.

However, with Sweet returning to the neighborhood, CJ once again, though reluctantly, is forced by Sweet to rebuild the Grove Street Families' dominance in the city, and witnesses a city wide riot sparked after Frank Tenpenny was acquitted of corruption charges in court. To wrap up all loose ends in his life, CJ would finally confront and kill Big Smoke, before pursuing Tenpenny, who would die in a car crash in front of the Johnson House. In front of the dead and broken man, CJ prepares to shoot Tenpenny's corpse with his gun, but Sweet stops him. CJ says that he "just wants to make sure it's over", but Sweet decides that it is safer to not leave evidence. He then leaves Tenpenny with the words "See you around... officer."

After the riot breaks up, Madd Dogg visits the Johnson house with an announcement that he's received a golden record for his new album. Everyone inside then decides to keep a low profile with everything that they've accomplished. CJ himself then gets up and leaves the house only to get a prank call from Catalina who is heard having sex with her boyfriend, Claude.

Carl Johnson is the son of Beverly Johnson (deceased). He is the second-oldest Johnson sibling. The oldest is his brother, Sean (Sweet). The youngest is his other brother, Brian (deceased), and the second-youngest is Kendl. Nothing is known about their father, although in "The Introduction", CJ mentions that he never met his father. CJ does not have any living direct relatives other than Sean and Kendl.

CJ is markedly different from the previous playable characters in the Grand Theft Auto series. While Claude and Tommy Vercetti are both depicted as completely heartless and feeling no regret for all of the people that they kill, CJ is depicted as having a considerably less violent personality, occasionally giving his victims a chance to redeem themselves. An example is his failed attempt at convincing Eddie Pulaski to see that he was no more than Tenpenny's pawn. Furthermore, CJ displays genuine remorse for having to kill fellow Grove Street friends Ryder and Big Smoke, who he considered close friends. However, CJ still has no problem with killing members of other gangs, and willfully slaughters any that get in his way of reclaiming Grove Street Families turf or try to sabotage his businesses.

CJ was voiced by Chris Bellard, known as Young Maylay.  Some say he bears a striking resemblance to Dr. Dre, though this is debatable. Rumors circulated the internet for a while that Dave Chappelle was supposed to voice CJ, but these were most likely just wishful thoughts on the part of Chappelle's fans

CJ's appearance is highly customizable as his apparel as well as appearance can be changed. He can change what he is wearing on his torso, legs, shoes, watch, hats, shades, and chains. The only thing that cannot be changed are CJ's underpants. The clothing he wears adds on to his total Respect and Sex Appeal stats. If CJ does not have a change of clothes after a long enough time, people on the street will tell him "You Stink!" 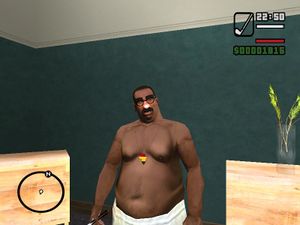 CJ's image is also affected by his level of fat and muscle, which can be affected by how much food he consumes as well as how much exercise he gets. Other stats that CJ has are weapon skills, sex appeal, respect, stamina and lung capacity, but they do not affect his appearance.

There are also items that can be collected and activities CJ can do to improve some of his stats.

Here are some quotes that CJ says during gameplay.

Here are some things he says if you leave your CJ very fat, but with very little muscle.

"You got a problem with the big man huh!"

"I got weight on my side"

Here are some things he says if you leave your CJ very muscle, but with very little fat.

"Who you callin' a bendico"

"You got a problem with Mr. Muscle Man, huh!"

"I ain't takin' this shit fool"

"I got muscle on my side"