Caterpie is a cateripllar-like Pokémon that is usually found in forests. Its diet is mainly leaves. It is able to climb trees using the suction cups on its feet to climb even vertical slants. In the Pokémon games, it is very abundant and usually found in forests such as Viridian Forest in the Kanto region. Taking a bug Pokémon early in the Pokémon games have a benefit of fast evolution and Caterpie is no exception.

Caterpie’s name is derived from the word caterpillar. The name Caterpie refers to the species as a whole, as well as to individual specimens in the games, anime, manga, trading cards, and other media. In the beta versions of Red/Blue, it was called Butterpie.

Caterpie is a relatively weak Pokémon, but like many real caterpillars it employs biological adaptations to help it survive. Its green coloring allows it to hide easily in foliage, and the eye patterns on its head serve to scare away predators. That failing, it can release a sticky, smelly liquid from the feeler on its head, as those foolish enough to touch this antenna learn the hard way. It evolves into a Metapod then into a Butterfree. Shiny Caterpie are golden.

Its short feet end in suction cups that allow it to easily climb on any surface, no matter how steep. It uses these to climb trees and satisfy its voracious appetite, even feeding on leaves larger than its own body. When it has eaten enough to fuel its growth, it sheds its skin, covers itself in silk, and becomes a Cocoon Pokémon, Metapod.

In the anime, a coloring error resulted in Caterpie having a yellow mouth to match its undersides.

Caterpie serves as the main prey of Pidgey, Pidgeotto, Spearow, and Taillow.

Caterpie are featured in the Pokémon video game series. Originally in Japanese, but later translated into other languages, the games have sold over 143 million copies worldwide.[1]

Caterpie are one of the first few Pokémon found in several Pokémon video games, and, just as real caterpillars are the fastest-growing animals in our world, caterpillar-like Pokémon evolve into their secondary and final forms faster than any others. Evolution in the Pokémon universe is a type of metamorphic change, usually caused by gaining experience in battle.

Caterpie are found in the Viridian Forest in Kanto, and in the Ilex Forest in Johto.

All Pokémon have specific stat-ratings of the qualities, such as power, speed, and vitality, which help them in battles. All ratings can be improved by certain costly items available in the game.[2] Caterpie's statistics are low, and they do not learn any new attacks before they evolve into Metapod upon reaching level 7.

Its battle cry is just like Goldeen's due to space constraints on the original two games.

The Pokémon anime series and films are a meta-series of adventures separate from the canon that most of the Pokémon video games (excepting Pokémon Yellow[3]) follow. The anime features the quest of Ash Ketchum,[4] a young Pokémon trainer, as he and several other companions travel around the world with their Pokémon partners.

In the anime, Caterpie was the very first Pokémon Ash Ketchum captured - probably through beginner’s luck, as he didn’t even bother to weaken it in battle first. He soon sent it out in an attempt to capture a Pidgeotto, but it was almost eaten by the Bird Pokémon because of its type disadvantage and its service as prey to many Bird Pokémon. Later, despite its weakened state, it helped Ash to defeat Team Rocket using String Shot, and evolved into a Metapod - faster than any known specimen, according to Dexter (the A.I. of Ash’s Pokédex).

Through either deliberate action or sheer coincidence, Caterpie serving as Ash's very first caught Pokémon occurred in 1996, the same year a new trilogy of Mothra movies began. Mothra had been garnishing a new wave of popularity after her return to the Godzilla movie series in 1992, and with word of a new Mothra movie on the way, Caterpie very well could have been placed in the anime early on to cash in on Mothra's success.

It is the first Pokémon to evolve in the anime in a unique way, such as using string shot to cover it's entire body like a real caterpillar to turn into a Metapod. 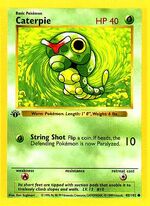 In the Pokémon: The Electric Tale of Pikachu! manga, which loosely parallels the storyline of the anime, Ash caught a Caterpie when it let its guard down. After battling Brock, they were having lunch with Misty (during which Pidgeotto eyed Caterpie hungrily), and it evolved into Metapod. In Pokémon Adventures, a Caterpie was the first Pokémon that Yellow captured on her own (albeit with instruction from Blue). At first, she had no idea how she was supposed to go about capturing it, since she hates to use Pokémon for battle, but she prevailed in the end and nicknamed it Kitty. As with all her Pokémon, she became close to Kitty, considering it her friend, and was reluctant to let it evolve.

Caterpie has not had a particularly extensive career in the Pokémon Trading Card Game, appearing only in the Base Set (and Base Set 2 plus the Legendary Collection), Neo Discovery, Expedition, and EX FireRed & LeafGreen.