Centipede is a shooter arcade game released in 1980 by Atari. Two key designers were Ed Logg and Dona Bailey. It was also one of the first arcade games to have a female player base. The game became very popular throughout the 80's and spawned the sequel Millipede. 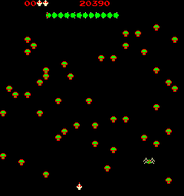 Shoot the Centipede to win.

When the player loses a life:

Centipede was followed by Millipede in 1982, a somewhat less successful arcade game. In 1992, Atari Games developed a prototype of an arcade game called Arcade Classics for their 20th anniversary. It included Missile Command 2 and Super Centipede.

In 1998, Hasbro-owned Atari released a new version of the game for the PC, PlayStation, and Dreamcast. This version looks and plays very differently to the original game, with free movement around the map, 3D graphics, and a campaign which can be played in single-player or multiplayer mode. The original version of Centipede is available in this version, albeit with slightly updated graphics.