Chansey's name is a corruption of chance; like its Japanese name, Lucky, it seems to refer to the rarity of this Pokémon.

Chansey is a rare egg-shaped Pokémon with much fatty tissue around its body and hair-like outgrowths on its head. It is said to bring happiness and good luck to whoever catches it. It has a pouch on its belly as a marsupial animal would, and in this pouch it always keeps a special egg. These eggs, several of which are laid daily by Chansey, are both nutritious and delicious to the point where they are eagerly consumed even by people who do not have an appetite.[1] It is unlikely that these are the same eggs that they use to reproduce, as they willingly share them with others, especially the injured and/or depressed. It has been said that they love to share them with individuals who have good in their hearts.

Chansey is a symbol of kindness and welfare,[1] and for good reason, in the wild, Chansey are often found helping the young of other Pokémon species for various reasons. It also is said that Chansey brings happiness to its owners,[1] partly because it is uncommon and difficult to catch with a Pokéball. For that reason, it is frequently sought out and poached.[1]

All Chansey are female; it breeds with other male Pokémon of its Egg Group (Fairy), such as Pikachu or Castform. In the second-generation game Pokémon Gold and Silver, it received a Stage-2 evolution, Blissey. In the fourth-generation game Pokémon Diamond and Pearl, it received a Baby-Stage form; Chansey evolves from a Happiny. In Pokemon Diamond and Pearl, wild Chansey can be found in the tall grass on Routes 209 and 210. The appearance rate is uncommon (5%).

Chansey has a storied past in the above Pokémon games thanks to its extremely lopsided statistics and movepool. In the first generation of games, Chansey had the highest number of Hit Points of all 151 then-existing Pokémon, alongside a high Special rating, offset by a below average Speed rating and one of the lowest Attack and Defense statistics in Pokémon. It was often used by Pokémon Trainers as a special brick. In the third-generation Pokémon games for the Game Boy Advance, both Chansey and its evolution, Blissey, gained the Natural Cure and Serene Grace abilities.

In the first- and third-generation games, Chansey is one of the rarest Pokémon that can be captured in the Kanto Safari Zone; additionally, Chansey can be caught wild in the Cerulean Cave in first-generation games, as well as snagged as a Shadow Pokémon in Pokémon XD: Gale of Darkness. In the second- and fourth-generation games, Chansey can be caught wild outside of Safari Zone areas. In Silver, Gold, and Crystal, a Chansey can be found on routes 13 14, and 15 on the Kanto side, after you cut the grass and go to the tree area. In Pokémon Diamond and Pearl, a Chansey is used by a trainer named Cheryl, whom the player escorts through Eterna Forest. This is one of many times where wild double battles will occur.

Chansey are also found in the Nintendo 64 game Pokémon Snap in the Beach Course. It's hidden as a pink ball chased by an Eevee, but throwing food or a Pester Ball at it will cause it to uncurl itself into its regular shape. It can also be found in Pokémon Mystery Dungeon Blue and Red versions in the dungeon Joyous Tower.

This Pokémon (along with Blissey and Happiny) also has a number of items associated with them. There's a chance that they may hold the Lucky Punch, which increases Chansey's critical hit ratio and the Oval Stone, which is used to evolve Happiny. There is also the Luck incense, which is used to breed Happiny and to double the amount of money earned in battle. However, the most sought after item that Chansey may have is the Lucky Egg, which can double the amount of Experience Points (or EXP) earned in battle.

In Diamond and Pearl, Chansey and Happiny are both available in the wild, but not in the Safari Zone (caught this way in FireRed and LeafGreen). The two routes north and south of Solacean Town both has Chansey and trainers with Happiny. The protagonist may obtain a Happiny by receiving an egg from a mountain man in Hearthome, before traveling in Solacean.

The Chansey evolutionary chain, strangely, all gives high EXP points in battle. A level 20 Happiny would be worth 900 points, while Chansey would give more than a legendary.

Chansey has minor cameos in the Super Smash Bros. series. In the first two games, Chansey can appear from a thrown Poké Ball, where it will use Hardboiled to scatter eggs around the stage that may contain items, explosives, or be consumed as health replenishing food. Chansey is also available as a collectible trophy. In addition, in the original game Chansey can appear in the Saffron City stage to heal a combatant standing in front of a certain door. Chansey was also a float in the "Poke floats" level of "Super Smash Bros. Melee". However, Chancey did not return for the next installment in the Smash Bros series, Super Smash Bros. Brawl.

The Pokémon anime series and films are a set of adventures separate from most other versions of Pokémon, featuring Ash Ketchum as the main character, and following his quest to become a Pokémon Master. He and his companions travel around the Pokémon world battling other Pokémon trainers.

Chansey are often seen aiding the recurring character, Nurse Joy, a family of women who devote themselves to healing Pokémon, They appear larger in the anime than they were said to be in the game; In the anime they appear over 6' tall, larger than most humans, whereas in the game's pokédex, they are marked at 3'11". They are often seen taking care of a pokémon. Individual Chansey characters have also starred in the anime. In "Episode 131. Ignorance is Blissey", it is revealed that Jessie of Team Rocket went to Pokémon nursing school with Chansey, including one who later joins a Pokémon Center in Johto, as a Blissey. Despite Team Rocket being "bad guys", Blissey helps Jessie and her friends, later defeating them in battle to save her position at the Pokémon Center.

In Pokémon Special, Chansey is seen as a Pokémon under the ownership of Daisy Oak. 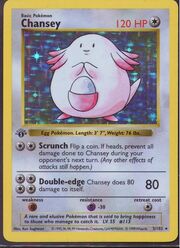 Chansey can be found in eight individual sets in the Trading Card Game; Base Set, Base Set 2, Neo Destiny, Expedition, Aquapolis, EX Ruby & Sapphire, EX FireRed & LeafGreen, and EX Unseen Forces.[2] The Base Set Chansey (right) was one of the strongest Pokémon in the game during the beginnings of the series, with the then highest possible Hit Points and ability to protect itself from attack.[2]