Charizard is a popular Pokémon from the Pokémon series of games. It experienced great popularity back in the days of Pokémon Red and Blue, being the general favorite evolution of the three starter Pokémon, and having a prominent role in the Pokémon anime. It is comparable to a dragon-type because of its wings and fire-breathing ability, and can also learn moves like dragonbreath. It is number 6 in the International Pokédex.

Charizard's name comes from the words char/charcoal and lizard. It can spit fire hot enough to "melt" bolders, and can sometimes start forest fires unintentionally. When enraged or battling furiously, the flame on the end of its tail burns blue. Like its previous evolutions, if the flame on its tail goes out, Charizard will die. Besides having immense fire abilities, Charizard can also fly to altitudes as high as 4,600 feet.

Charizard can be obtained only by choosing Charmander as your starter Pokémon and evolving it. It cannot be caught in the wild.

Charmander can be obtained from a man on the route to Bill's house in Cerulean City. You must then train and evolve it to get Charizard.

At the volcano, you can force the Charmeleon walking in circles around a pit of lava to evolve by throwing an item at it and knocking it into the lava. It will evolve and breathe fire at you. Take a photo of it attacking for high points from Professor Oak.

You must trade from R/B/Y to get Charizard.

You must trade from FireRed/LeafGreen to get Charizard.

Charizard can be obtained only by choosing Charmander as your starter Pokémon and evolving it.

Charizard has made several appearances in Pokémon spin-offs and in other series, including Pokémon Snap, Pokémon Mystery Dungeon: Blue Rescue Team and Red Rescue Team, and Pokémon Ranger. In Pokémon Mystery Dungeon, Charizard acts as a non-playable character and as a member of a rescue team led by Alakazam, a primary character in the games. In Pokémon Ranger, Charizard is a wild boss Pokémon who becomes attached to the player's character and assists him or her several times throughout the game. Charizard also appears in Super Smash Bros. and Super Smash Bros. Melee as a Pokémon which will appear out of a Pokéball and attack opponents of the player who summoned it. In Super Smash Bros. Brawl, Charizard will be playable through the Pokémon Trainer character, who rotates between it, Squirtle, and Ivysaur.

In the anime of the franchise, Charizard is arguably Ash's strongest Pokémon surpassing both Pikachu and Sceptile. Ash's Charizard started out as a Charmander which had been abandoned by another trainer. As the series continued, Charmander became loyal to Ash, then evolved into a Charmeleon. Charmeleon refused to obey him, which within the world of the franchise is something that Pokémon who become "stronger" and more experienced than their trainers sometimes do when they lose their respect for their trainer. Charmeleon evolved when Ash summoned it for protection from a wild Aerodactyl which intended to devour him. Ash was ultimately saved by Charizard, but it remained unclear in the series whether Charmeleon evolved to rescue Ash or just to fight Aerodactyl, which had injured it. Charizard did purposefully swoop down to catch Ash as he fell, however.[1]

Originally, Charizard, like Charmeleon, did not obey Ash, and only battled Pokémon that would pose a challenge, mainly other Fire-type Pokémon, but through its willfulness it often inadvertently helped Ash reach his goals, particularly against Gym Leader Blaine. However at one time, its refusal to obey Ash led to his loss in the Kanto League Finals. It became loyal during the Orange Islands arc after Ash battled a trainer with a Poliwrath and Charizard was frozen solid. Because of Ash’s continuous self-sacrificing efforts to save it from certain death, Charizard began to obey Ash, and ultimately defeated the Poliwrath in a rematch.[2] It remained on Ash's team, contributing to his win in the Orange League and part of Johto. It eventually stays behind in the Charizific Valley, a reserve where many wild Charizard battle and train to become stronger, likely due to meeting Charla, a female Charizard that it develops a fondness for.[3] Charizard, like many of Ash’s other Pokémon, has returned on a temporary basis to battle at Ash’s side, typically when Ash faces a particularly powerful Pokémon. Charizard has also saved Ash's life on more than one occasion, as seen in the film Spell of the Unown.

In The Electric Tale of Pikachu manga, which loosely parallels the storyline of the anime, Ash evolves his Charmeleon into a Charizard to battle in the Pokémon League tournament. He has trouble controlling it, however.[4] Ash brings Charizard to the Orange Islands, and, having trained it diligently since the near-disaster, uses it to battle Dragonite in the final showdown with Drake, the Orange Crew Supreme gym leader.[5]

In the Pokémon Adventures manga, Blue, originally Red’s rival and later the Viridian City Gym leader, owned a Charizard which evolved from a Charmander he received from his grandfather, Professor Oak. In Chapter 28, "Peace of Mime", Blue used his to gain access to Saffron City, and ultimately help disable the Barrier, being created by a Mr. Mime, with the help of Red's Pikachu, Pika.[6] In Chapter 31, "The Art of Articuno", Red and Blue face off against Koga's Articuno and are frozen by its Ice Beam, but ultimately defeat the Team Rocket Executive with Charizard's Flamethrower.[7] In Chapter 33, "The Winged Legends", it teamed up with Red's newly evolved Venusaur, Saur and Green (Pokémon)|Green's Blastoise, Turtley, to defeat Sabrina's Zapmolcuno (a merged form of Zapdos, Moltres and Articuno) and destroy Team Rocket's control on Saffron City, splitting the three birds in the process.[8]

Blue's Charizard re-appeared next in Chapter 40, "A Charizard... and a Champion", during the final match of the Ninth Pokémon League, against his longtime Rival, Red. The battle began with Red's Saur and Blue's Charizard facing each other. Charizard tried to use Fire Punch, but was hit by Saur's Poison Powder. Charizard was nearly knocked out, despite the type advantage. As the battle progressed, Blue's Ninetails used Fire Blast to send Pika and Red's Poliwrath, Poli, flying towards the ceiling. The two trainers then used their first Pokémon to battle again, Saur binding the Charizard from attacking. Suddenly, thunderclouds, formed from the attacks of Poli and Pika, began to form above the battlefield, and Saur submerged a vine into the cloud, shocking Charizard and knocking it out.[9]

When the "FireRed and LeafGreen" volume of the manga began, Red, Blue and Green, the original protagonists, returned to fight the newly formed Team Rocket and the Deoxys under their power. In Chapter 24, "FireRed and LeafGreen", the three trainers were trapped inside the Trainer Tower in the Sevii Islands, battling the main computer of the building and the Deoxys Divides. Due to the prior battle between Red and Team Rocket, most of his team were near death. This causes Blue to trade his Charizard with Red's Saur, since Blue was the person who was leading the fight to free Mewtwo from the binds. After struggling to co-ordinate Turtley, Saur and Charizard, the three trainers managed to focus the angle of the three powerful attacks, Blast Burn, Hydro Cannon and Frenzy Plant, to free Mewtwo, who in turn, destroyed the Trainer Tower. Red now wields Charizard in his battle against Giovanni.[10]

In chapter 179, Charizard, Blastoise and Venusaur have been called back by Red, Blue and Green as they recalled back the Legendary Pokémon into their Pokéballs to fight their last battle against Pryce's ultimate weapon. 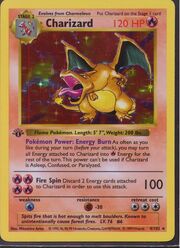 Charizard appears often in the Pokémon Trading Card Game as a powerful Stage-2 Fire Pokémon, including appearances in the Base Set (reprinted in Base Set 2 and Legendary Collection), Team Rocket (as Dark Charizard, normal and holographic versions), Gym Challenge (as Blaine’s Charizard), Neo Destiny (as Shining Charizard, a Basic Pokémon), Pokémon Neo 2 Binder (Japanese only, reverse holo), Pokémon *VS (as Lance’s Charizard,[11] a Basic Pokémon, in Japanese only), Expedition (twice, including a holographic version), Skyridge (as a Colorless Pokémon with the "Crystal Type" Poke-Power), EX Dragon (as a secret holographic card), EX FireRed & LeafGreen (as Charizard EX),[12] and EX Crystal Guardians, as a Lightning- and Metal-type Delta Species Pokémon.[13][14] The latest edition of Charizard is Charizard *, an incredibly rare card, as a δ species Dark-type Basic.

When the Pokémon Trading Card Game became widespread in North America, the Base Set Charizard card was very popular and always in high demand, due to its high HP value and its powerful Fire Spin attack. In trading card magazines, the card’s value often exceeded $60.[15]