Charmander is one of the original 150 Pokémon that first appeared in Pokémon Red and Blue. It is well known as one of the first three starting Pokémon, and as the Pokémon that eventually evolved into the popular Charizard.

Choosing Charmander puts more difficulty into the beginning of the game, due to Charmander's type weaknesses against many of the first Pokémon encountered; Brock and Mt. Moon's Rock-types and Misty's Water-types all have an advantage to Fire-types. Some advantages are in Erica's Gym, where having a fire-type would come in handy especially combined with flying/bug types. Also, Charmeleon/Charizard's high physical attack and powerful moves can help to beat Sabrina's Gym. The last use is to use fire against fire on Blaine, but water types would do a lot better. In FR/LG, it can be effective against steel-types such as Magnemite found in Lt. Surge's Gym.

Charmander may be a good beginning choice though, due to the virtual lack of Fire Pokémon until later in the game. Trainers may run into some trouble later in the game when their Charmander has evolved into Charizard, and it acquires a second type, Flying. This second type gives your starter a new weakness, Electric; removes its resistance to Ice(except in Red/Blue); and makes it take four times than normal damage from Rock-type Pokémon. At the same time, however, it becomes immune to its Ground-type attack weakness, which almost makes it worth it.

The intensity of the flame can be taken as an indicator of Charmander’s physical and emotional status. When the flame’s intensity is diminished, Charmander is weak and its health may be at risk. When the flame burns normally, Charmander is healthy, and it can be seen to waver when Charmander is happy, and blaze fiercely when it becomes enraged or excited. If the flame were to ever go out, it would mean the end of Charmander’s life. Although Charmander will not necessarily die if it falls into water, submergence for an extended period of time could prove fatal. In the rain, a Charmander’s life is especially endangered, and each drop of rain that falls on its tail creates a loud puff of steam. Baby Charmander that are not yet familiar with the flame sometimes accidentally burn themselves with it.[1] Charmander generally prefer hot places to live such as mountains close to volcanoes.

Charmander play a key role in the original Pokémon video games, RPG strategy games created by Satoshi Tajiri for the Nintendo Game Boy. In Pokémon Red and Blue, as well as their remakes, Pokémon FireRed and LeafGreen, the player may choose Bulbasaur, Charmander or Squirtle as his or her first (or "Starter") Pokémon. If the player chooses a Charmander, the protagonist’s rival will choose a Squirtle,[2] since Squirtle have a type advantage over Charmander.[3]

Charmander and its evolved forms Charmeleon at level 16 and Charizard at level 36 are known for their high Speed and Special Attack statistics. They learn powerful Fire-type attacks, such as Flamethrower. When Charmander evolve into Charmeleon, they receive a significant increase in all stats. These stats are further increased as they fully-evolve into Charizard.

Charmander are not found in the wild in any version and must be chosen as the player's starting Pokémon or received through trading. For this reason, Charmander (and other starter Pokémon like Bulbasaur and Squirtle) are popularly bred for trading with other players.

Charmander is not available as a starting choice in Pokémon Yellow, as the storyline follows the animated series, and the player is forced to take Pikachu as their starting Pokémon. However, the player may receive a Charmander as they progress in the game.

In addition, Charmander has made appearances in other Pokémon games. Charmander appears in the Nintendo 64 game Pokémon Snap, in the Volcano area of “Pokémon Island”, the game’s setting. It has also made cameo appearances in Pokémon Stadium and Pokémon Stadium 2, as well as the Nintendo GameCube game, Pokémon Channel. Charmander is also one of the sixteen starters or a playable character in the Pokémon Mystery Dungeon games. One notable non-Pokémon game appearance of Charmander's is as one of the random Pokémon that appear within the Saffron City stage in the original Super Smash Bros.

Charmander is also a Confirmed Character in the new Arcade game Pokémon Battrio.

Charmander was abandoned by his former owner, Damien, telling Charmander he would come back for it. Later, Team Rocket arrived and attempted to steal Pikachu, but Charmander scared them off with its Flamethrower attack. Damien, who just happened to be walking by, saw that he was wrong about Charmander’s strength after all, and explained his dislike of weak Pokémon. After Charmander heard this, it rejected him and joined Ash.[4] Ash’s Charmander later evolved into Charmeleon during a battle against an army of Exeggutor, and later into Charizard while fighting a powerful Aerodactyl.[5]

Richie also has a Charmander, named Zippo in reference to the lighter of the same brand, which was used against Ash in their Indigo League battle. However, at some point before his next appearance in the Whirl Islands story arc, Zippo evolved into a Charmeleon.

As a starter Pokémon, Charmander has also been seen alongside Bulbasaur and Squirtle in episodes that feature Kanto trainers who are starting out on their Pokémon journeys. To this effect, Charmander have appeared in minor roles in both Pokémon Chronicles and Advanced Generation.

A Charmander is the leader of Team Go-Getters in the half-hour animated special "Pokémon Mystery Dungeon: Team Go-Getters Out Of The Gate!". He is the first to meet the human who has been turned into a Squirtle, though neither he nor his partner Chikorita fully believe that Squirtle was actually a human. Brave and energetic, this Charmander is always the first into battle, and is considerate of those around him, even his enemies.

In Pokémon: Pikachu Shocks Back which loosely parallels the storyline of the anime, Charmander’s story begins in a similar manner. When Pikachu is accidentally left behind by Ash, a Squirtle convinces Pikachu and Charmander to travel with it to a sanctuary for abandoned or weak Pokémon. Along the way, they meet up with Team Rocket, as well as a Kangaskhan who has adopted a human boy. Together they travel to the sanctuary, and true to form, Team Rocket tries to capture all the Pokémon, only to be beaten by Pikachu and Kangaskhan. Charmander’s trainer Damian, who had fallen into a coma after he left Charmander, finds his Pokémon and they are reunited.

In the Pokémon Adventures manga, Blue received a Charmander from his grandfather, Professor Oak. Having since evolved into a Charizard, it is part of his team as Gym Leader of Viridian City.

In Magical Pokémon Journey, a male Charmander belongs to the character Peanut. This Charmander is always causing trouble by getting into fights with other Pokémon.

In Pokémon Zensho, Satoshi is given a Charmander as his starter Pokémon, while Shigeru chooses a Squirtle.

In the Pocket Monsters manga by Kosaku Anakubo (AKA Sam Marshall), Green (the rival) has a mischievous Charmander that goes along with whatever his trainer wants him to do. It tends to be very antagonistic toward Red's Clefairy. 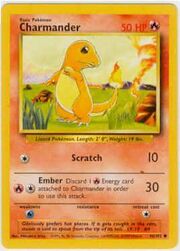