Charmeleon is one of the original 151 Pokémon that first appeared in Pokémon Red and Blue. Like its evolutionary relations, Charmeleon has a flame burning at the end of its tail; however, unlike its peaceful basic form, Charmander, Charmeleon constantly seeks battles, calming down only when it wins. Charmeleon can attack with its claws as well as its fiery tail, and can breathe fire when excited.

Charmeleon’s name is a portmanteau of “char” (to burn) and “chameleon” (a small lizard). However, Charmeleon should not be considered the Pokémon equivalent to a chameleon, as it has only one actual relationship with the real world animal, the crest on its head, (the Pokémon Kecleon has more liknesses though). Its Japanese name originates in a pronunciation of the word “lizard” for its reptilian nature.

Charmeleon is a dark red, bipedal lizard with a single horn on the back of its head similar to real-life dinosaurs of the Saurolophus family. Its relations Charmander and Charizard are light red-orange, and Charmeleon is the darkest member of its evolutionary group. Its forearms, which now bear long, sharp claws, are much larger and more defined than the Charmander which precedes it, and unlike its more docile pre-evolution, this Pokémon has a very short temper and has been known to spit bluish flames and burning pieces of dust when agitated. It is excessively savage by nature, and loves fighting. When it is excited, the flame on its tail may turn bluish-white as well. It slashes mercilessly at opponents with its powerful claws and lashes about with its flame-tipped tail to knock down opponents, greatly heating the area in the process. Extreme caution is advised when approaching this vicious Pokémon.

Its tail is capable of lifting five adults; by waving it Charmeleon may increase the air temperature around itself to unbearably high levels.

Charmeleon can only be obtained by evolving Charmander at level 16, which are not found in the wild. Instead the player must obtain a Charmander in either Pokémon Red, Blue, FireRed or LeafGreen at the start of the game, where Prof. Oak offers you a choice of either Charmander, Squirtle or Bulbasaur. These three are known as "starter pokémon". Charmander is also available in Pokémon Yellow later in the game. Furthermore, Charmeleon evolves into Charizard at level 36.

The shiny version of Charmeleon is of a yellowish color.

A couple of Charmeleon made an appearance in the Volcano area of the N64 game Pokémon Snap. The first one evolves from a Charmander that was being bullied by a Magmar and the second runs around a lava pit and evolves if knocked in. It also appears in the Pokémon Mystery Dungeon games.

When Ash’s Charmander evolved into Charmeleon, its personality changed completely. It became a very disobedient Pokémon and only fought when and how it felt like doing so, despite Ash having six Gym Badges at that moment, making Pokémon up to level 70 obedient, and Charmander evolving at level 16. It first showed its complete lack of respect as soon as Ash congratulated it on its evolution. At that time, it breathed fire into Ash’s face. It evolved into Charizard three episodes later, wanting to fight an Aerodactyl.

When Ash met Richie in the Whirl Islands, his Charmander, Zippo, had evolved into a Charmeleon (Zippo, however, remained obedient after evolution). As of the end of Pokémon Chronicles, Zippo has not evolved.

On an island in between Lilycove City and Mossdeep City, one of the students at the Pokémon referee school owns a Charmeleon, as well as an Ivysaur and Wartortle.

In Pokémon 4Ever, a young Professor Oak owned a Charmeleon and beat a Sneasel belonging to a Team Rocket member. Sammy Oak, the younger incarnation of Professor Oak, owned a Charmeleon that (like Zippo) was notably more obedient than Ash’s, though still possessing a tough attitude. It fought alongside Ash’s Bayleef against the antagonist’s Sneasel and Scizor.

During the Orange Islands storyarc, a Pokémon sculptor named Mateo used a Charmeleon to make his crystal sculptures as well as attempt to capture the Crystal Onix. 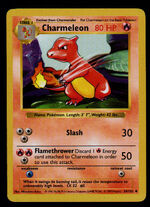 In the Pokémon Adventures manga, Blue briefly owned a Charmeleon after it evolved from Charmander and before it evolved into Charizard. When Blue was possessed by a Gastly in the Lavender Tower, Charmeleon was too. Blue's Charmeleon was eventually released from its possession only to be faced down by an Arbok owned by Koga. Charmeleon tricked Koga by using a zombie Psyduck to deflect Arbok's acid attack before literally slicing the Arbok in half with his tail.

Charmeleon, like Charmander, has made quite a few appearances in the Pokémon Trading Card Game. It debuted in the Base Set as a powerful stage 1 card (included in Base Set 2 and Legendary), then returned in the Team Rocket expansion (as Dark Charmeleon) with a potent Fireball attack, and as Blaine’s Charmeleon in Gym Challenge, then once in Expedition, as a rare holographic card in EX Dragon, in EX FireRed & LeafGreen, and finally in EX Team Rocket Returns. This last card is a rare holographic card that is technically identical to the one in EX Dragon, but with different artwork.