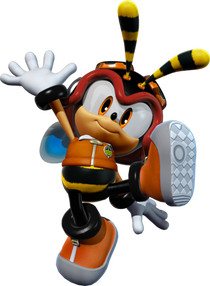 Charmy the Bee is a fictional bee who appears in the Sonic the Hedgehog series. His earlier appearances were only in the manga, but soon became adapted to the video games.

Charmy is a kid. A kid who loves to play. He loves to play so much that he prefers to do that over working with the rest of the group, much to their dismay. He is scatter-brained and childish, but what he lacks in maturity he makes up in spirit and quirkiness. He has respect for Shadow the Hedgehog, admiring his killing skills.

Charmy, along with Vector the Crocodile, and Espio the Chameleon are a part of a detective agency named Team Chaotix. Charmy is the youngest member of the group. He's the "flight" character of Team Chaotix, he'll help them travel to unreachable places high in the air and shoot his teammates at enemies.

Charmy appears in the "Prison Island" stage as a "partner" to Shadow. An interesting note is that, unlike most partners in the game, Charmy CANNOT be controlled by a second controller, because he is constantly airborne.

At the end of the game, he manages to hack into the A.R.K's computer through the use of his stinger, ultimately allowing them to free Shadow from Black Doom's mind control.

There are two collectible cards of Charmy.

Charmy makes a cameo as a referee.

Charmy, once again, makes a cameo as a referee.