Chinchou (チョンチー, Chonchī, Chonchi in original Japanese language versions) is one of the 493 fictional species of Pokémon from the Pokémon Franchise - a series of video games, anime, manga, books, trading cards and other media created by Satoshi Tajiri. Chinchou was introduced in the second generation.

Chinchou resembles a tripod fish or an angler fish. It has a small blue body and two antennae sprouting from its head, both of which have a yellow globe at the end. These antennae are said to have evolved from fins. A Chinchou's eyes are yellow and their pupils have the shape of plus signs. When blinking or closing its eyes, only the vertical parts close, making the pupils look like minus signs, it's unknown whether this is a coincidence or not.

Chinchou shares a number of similarities to the real angler fish. Its habitat is the dark depths of the ocean floor. In the absence of any other light, Chinchou sees its surroundings and communicates by shooting positive and negative charged electricity particles between the tips of its antennae, creating an electric current and thus light. This can be said to be a form of bioluminescence. The charges Chinchou shoots between its antennae can also be used offensively, to stun its opponents with a flash of light or shock them with electricity.

Chinchou made its debut in Pokémon Gold and Silver, where it could be caught via a fishing rod. It evolves into Lanturn at level 27. It was then re-introduced in Pokemon Ruby and Sapphire as a catchable pokemon, hidden in the seaweed-like area near Sootopolis City. In Pokemon Diamond and Pearl, Chinchou can be caught by use of a fishing rod on Route 220.

Chinchou has made so far two notable appearances in the animé. The first, in episode #214 (Takin'It on the Chinchou) features a large group of them travelling from a lake to the ocean, possibly to mate and return to lay their eggs, as is customary of many real marine animals. The second, in episode #219 (The Perfect Match) features a Chinchou that battled against Misty's Corsola and won, eliminating her from the Whirl Cup Championship.

Chinchou were first seen in Volume 8, encountered by Gold during his search for his Poliwag.

Misty is later seen with a Chinchou in Volume 12, using it to light up the area behind the Tohjo Falls. 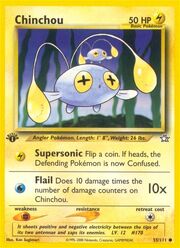 Chinchou has been a popular Pokémon, and has made appearances as a basic Electric-type (and once as Water) Pokémon in the following expansions: