Cho Aniki is a video game series started by Masaya (and continued by Global A) with several installments that never made it to the US (and thus, should probably not be split up into several articles.) Cho Aniki roughly translates to 'Mighty Brothers' which roughly translates to 'homoerotic mansex'. The surprisingly long-lasting series has had several installments, the most recent of which was on the PS2. That's right. On your PS2. 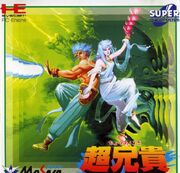 The game that started it all. It's essentially a shmup, with the standard 'shoot stuff and don't get shot' game play. The main characters are Idaten and his girlfriend Benten. They are accompanied by their friends (who will later become the stars of the series) Samson and his boyfriend Adon.

Samson and Adon really know how to dress up.

The second game in the series, the now-main-character, Samson, fires globs of 'protein' out of the large hole on the top of his head. In a surprising departure from... anything that's ever existed in the previous known universe, Samson is not on a quest to save a damsel in distress, but in fact, on a quest to save his boyfriend, Adon.

Unlike the first game, which was a shmup, the Super Famicom (that's the Japanese name for the SNES) version of the game is a fighting game, which uses characters from the original PC game. It departs from most fighting games in that (among other things) all the characters can fly.

At some point in the mid 90s, someone thought it was a good idea to use photographs of real people as video game sprites. This has been done in hundreds of games, and all of them look terrible. Cho Aniki is no exception. This installment in the series brings back the shmup style of the original, and, once again, features Samson shooting globs of 'protein' at large homoerotic bosses.

This was the first game in the series made by Global A. The title roughly translates to "Mighty Brother: Legend of the Holy Protein." and in this game, you don't play as Samson, but as the Holy Protein, a big glob of... protein. Samson and Adon fly with the protein and can take on different 'positions' to change the mode of attack. The other naked body builder men want to eat the Holy Protein to help make them more buff. Samson or his friend can pick up protein capsules to make them stronger. They can also come together into a special formation that fires a big white laser beam. One of the bosses is a six story tall ear of corn.

The main character in the series. He has a hole in the top of his head that shoots large white globs of celestial protein. No one's really sure what this is symbolic of.

Samson's lover. He looks and acts exactly like Samson. He has a negroplasty midway through the series.

A rare female in the Cho Aniki series. The little baby cherubs that fly around her occasionally turn into naked midget men.

Mami is a woman that's also a boat. She either controls three naked men, or three naked men control her. Either way, they seem to be having a good time up there.

Adam lives on the dark side of the moon. His half-moon ship has a large phallic cannon that he fires from between his legs. It effectively hides his unmentionables, as well as his 'special friend'... Steve?