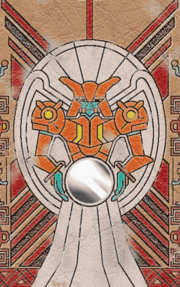 A wall mural of a Chozo in a Power Suit

A bird-like race in the Metroid universe that raised Samus Aran and designed her power suit. The Chozo are a peaceful and highly intelligent race. It is unknown exactly what's happened to this ancient alien species, as their appearance in most of the Metroid games is in the form of statues holding power-ups or blocking passage ways. Samus often rolls up into a Morph Ball to trigger these statues. It is implied in the Metroid games that they are extinct.

The Chozo are also known for their advanced technology. They are known to have created the Power Suit and other weapons that Samus wields. It is also possible that they created the Metroid to combat the X Parasite.

Ruins of Chozo civilizations are found on many planets in the Metroid universe such as planets like Tallon IV. It is also known that they have come into contact, at least, with the Luminoth, the Reptilicus, and the Vlla. Each of these beings are considered an Enlightened Species.