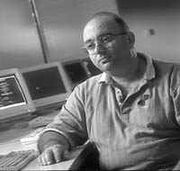 Don't mess with this guy

Claude Comair is president of DigiPen Institute of Technology and has a seat on the board of Nintendo Software Technology. Comair is passionate about making games, and educating the next generation of game-makers.

Comair was born in the middle-eastern country of Lebanon and was raised and educated there. He earned two Engineering degrees, with his work focusing on logic and graphics in computer simulations. Comair moved to Japan in 1984 to conduct engineering research at the Osaka University. There he wrote a computer language called VU that could be used to create three-dimensional database visualizations to simulate past and future events.

Comair moved to Vancouver, Canada in 1988 and established DigiPen. In 1998 he moved the school to Redmond, Washington, and was also appointed the chairman of NST.