Clefable (ピクシー, Pikushī, Pixy in original Japanese language versions) are one of the 493 fictional species of Pokémon creatures from the Japanese Pokémon media franchise. In all aspects of the franchise, Clefable, as with all other Pokémon, are used to battle both wild, untamed Pokémon and tamed Pokémon owned by Pokémon trainers.

Clefable's name is a portmanteau of the words clef and fable. Its name in the beta versions of the games was Ariala. Clefable's Japanese name, Pixy, refers to the mythical pixie. The name Clefable refers to the species as a whole, as well as to individual specimens in the games, anime, manga, trading cards, and other media. It evolves from a Clefairy and a Cleffa.

Clefable’s appearance is rather similar to Clefairy’s. It is larger than its pre-evolved form, with prominent ears and a pair of jagged wings on its back. Its feet have two claws each. Clefable inhabit remote mountainous areas and generally any environment that has sufficiently little ambient noise. Clefable’s hearing is extremely sensitive - it is said that it can discern the sound of a pin falling 1,100 yards away, so it is averse to living in areas with sound pollution (compare with Whismur).

Clefable are also extremely timid, and rarely seen in the wild. They avoid all contact with outsiders. Even sensing the presence of others in the area (which is fairly easy thanks to their prodigious hearing) will cause it to run and hide immediately. They will, however, come into the open on quiet, moonlit nights to take a stroll on a lake.

Clefable’s wings are probably not fit for real flight, but they allow it to move in a skipping, bouncy manner as if it were walking on the moon’s surface. They can even walk across the water’s surface this way, so when it takes the aforementioned stroll on the lake, it literally takes a stroll on the lake. Clefable’s wings, its hovering walk, its timidity and elusiveness have led them to be categorized as a type of fairy in the Pokémon world.

Clefable are not available in the wild. They are only obtainable by evolving a Clefairy with the use of the Moon Stone item. This means that the availability of Clefable is based on the availability of Clefairy. Since the moment of a Clefairy’s evolution into a Clefable is entirely in the control of the player, it must be chosen carefully, since Clefable cannot naturally learn any more attacks. Clefairy and Clefable are the only Pokémon besides Metang and Metagross capable of using Meteor Mash.

A strong addition to Cleffa, Clefairy, and Clefable in Diamond and Pearl is the ability Magic Guard. Magic Guard prevents most damage done to Clefable except for attacking moves. This can prevent damage from damaging held items, allowing Clefable to have only the benefits.

Clefable has appeared in the anime several times:

Clefable’s appearances are seldom away from Kanto, as that is the location of Mt Moon.

In Pokémon Special, Blue had a Clefairy that later evolved into Clefable.

In the Electric Tale of Pikachu, Ash befriends a Clefairy that evolves into a Clefable so it can explore the world.

In Magical Pokémon Journey, the second Pokémon Hazel meets is a timid and shy male Clefairy. He shrinks by using Minimize when he thinks he's threatened, however, when he does battle, his Metronome technique is very powerful. This Clefairy, along with Pikachu, reappear in the spin-off series of Pokémon Chamo-Chamo Pretty, a Magical Pokémon Journey spin-off. 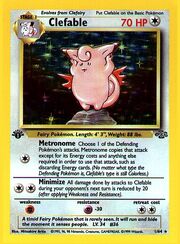 Clefable do not appear in Neo Genesis, though Cleffa and Clefairy do.