Clefairy (ピッピ, Pippi, Piipi in original Japanese language versions) is one of the 493 fictional species of Pokémon creatures from the multi-billion-dollar Pokémon media franchise – a collection of video games, anime, manga, books, trading cards and other media created by Satoshi Tajiri. The purpose of Clefairy in the games, as with all other Pokémon, is to battle both "wild" Pokémon, which are untamed creatures encountered while the player passes through various environments, and "tamed" Pokémon that are owned by Pokémon trainers.

Clefairy's name is a combination of clef, French for (musical) key, and fairy.[1] Its Japanese name may be a shortening and repetition of the word pixie, or the Japanese onomatopoeia for telepathy or the onomatopoeia for wagging a finger, much like a metronome, one of Clefairy's signature moves. In the English beta version of Pokémon Red and Blue, Clefairy's name was Aria, another term for a melody. The name Clefairy refers to both the overall species, and to individual Clefairy within the games, anime and manga series.

Clefairy is a small, bipedal creature. It has no neck, seeming to be somewhat stout compared to other Pokémon of its size, such as Pikachu. It is popular for its adorable nature. It has short pink fur, with a large brown patch on each of its two pointed ears. Between these ears is a large swirl of pink fur. It has two small eyes, no nose, and a small mouth with a tiny protruding fang. It also has a patch of darker pink fur under each eye.[2]

Clefairy are often admired for their cute appearance and playfulness. It's considered by many to be "adorable", making it a popular pet. Clefairy are difficult to spot, due to the fact that they can only be found in certain areas, infrequently. However, they seem to be much more common on the night of a full moon.[3]

Clefairy can be seen playing in groups, on the night of a full moon, retreating to their group slumber when dawn arrives. This Pokémon is noted to be able to store moonlight in the wings on its back, giving it the power to float in mid-air.[3] Clefairy seems to be based on a fairy, as it is a magical, somewhat humanoid,[2] winged creature, lending credit to its name. There have been sightings of Clefairy, with its evolutionary forms Cleffa and Clefable, using spaceships, and the Moon Stones used to evolve Clefairy are also rumored to come from extraplanetary locations.[4] It has recently been discovered that clefairy are actually aliens. They are presumably from a planet with high gravity, judging by their somewhat heavy build and ability to glide around as if on the moon.

Clefairy have a lot in common with Jigglypuff, as they are both pink, fairy-like Pokémon who are known for their singing abilities. Also, they both have baby forms who were released at the same time, they both have similar pink curls on their foreheads, and both evolve with a Moon Stone.

Wild Clefairy can only be found in Pokémon Red, Blue, Yellow, Gold, Silver, Crystal, FireRed, LeafGreen, Diamond and Pearl.[5] They rarely appear to Trainers in the caves that burrow through Mt. Moon in Kanto.[6] In Pokémon Red and Blue, as well as in FireRed and LeafGreen, 750 coins can be traded for a Clefairy at Celadon City's Game Corner.[5] In order to get Clefairy in Ruby, Sapphire, Emerald, Colosseum, and XD, the player must trade with FireRed or LeafGreen. Clefairy also appear in both versions of the Pokémon Mystery Dungeon games and is found at the Joyous Tower, where they appear rarely.

In FireRed and LeafGreen, the character Bill is shown to have been transformed into a Clefairy thanks to an accident with a recently developed teleportation device.

In Pokémon Gold, Silver, and all games since, Clefairy can be evolved from Cleffa[3] with a high level of happiness.[7] When its Happiness is high enough, a Cleffa will evolve the next time it gains a level.

Clefairy have above-average HP, allowing them to sustain more damage than the average Pokémon.[3]

A strong addition to Cleffa, Clefairy, and Clefable in Diamond and Pearl is the ability Magic Guard. Magic Guard prevents most damage done to Clefairy except for attacking moves. This can prevent damage from damaging held items, allowing Clefairy to have only the benefits.

In the Pokémon anime, Clefairy first appears in Episode 6, "Clefairy and the Moonstone!". Ash Ketchum's party and Team Rocket come upon Mt. Moon, and the native Clefairy lead them to a giant Moon Stone that is used as the center of the ring during their moon dance. Team Rocket attempts to steal it, but they are, as usual, thwarted by Ash. In the process, however, the giant stone shatters. But when the pieces rain down onto the Clefairy, some evolve into Clefable so they did not mind. The Clefairy and Clefable continue their strange rituals while the humans continue on their way.

In Episode 62, "Clefairy Tales!", Clefairy are revealed as aliens that accidentally landed on the planet using spaceships. A group of Clefairy intend to gather items that may become useful for the repairment of their ship. Consequently, they steal Ash's Pokémon (among those of other trainers) as they attempt to launch into space with the large spaceship. The Clefairy try to use Ash's Pikachu as their powerhouse, but Pikachu overpowers their electrical cage. During this same moment, a wild Jigglypuff is also involve in the conflict. The Clefairy have previously stolen its hand microphone in which the Jigglypuff has come to claim it back, thoroughly almost beating up every single Clefairy in the ship as well. The trainers and their Pokémon escape, as the powerless ship lifts and ends up crashing at a nearby fishing zone. The Clefairy try again to blast off into space at the end of the episode.

In Episode 160, "A Goldenrod Opportunity", Ash and his friends find a Clefairy in Goldenrod City. It is owned by Whitney, gym leader of the Goldenrod City Gym. Its Metronome attack (which allows Clefairy to use any attack in existence at random) prevents Team Rocket from stealing Ash's Pikachu as Metronome results in a Gust attack. Whitney also uses Clefairy in her gym battle against Ash. Clefairy also uses Metronome in the battle, but this time Metronome results in Splash (an attack that literally does nothing). Ash's Cyndaquil easily defeats Clefairy.

In Episode 248, "Wish Upon a Star Shape!", a Cleffa, the baby form of Clefairy, falls from a passing spaceship and lands near Ash and his friends, while the ship crashes nearby. Ash's Phanpy becomes friends with the Cleffa and helps it get back to its ship, where a group of Clefairy are using pieces of Team Rocket's machine to repair the ship. Cleffa gets to the ship just in time, and Phanpy watches it evolve into a Clefairy as the ship blasts off.

In Episode 411, "A Real Cleffa-Hanger", Ash and his friends return to Mt. Moon, where they encounter the group of Cleffa, Clefairy, and Clefable again. They all use Metronome, which consequently becomes Solar Beam, in order to thwart Team Rocket's plan of stealing all of the Pokémon of Ash, May, Misty, and Brock.

The Clefairy (or Pippi in Japanese) were voiced by Mayumi Iizuka (JPN).

Clefairy is a main character in the Japanese Pocket Monsters manga series (known as Poketto Monsutaa in Japan), where a male Clefairy is the Starter Pokémon for Akai Isamu, nicknamed Red in the series. Clefairy is a prankster who is often stubborn, bordering on comically stupid, and always being referred to as noroma no Pippi, "that stupid Clefairy", by others. This Clefairy has also had a cameo appearance in Advanced Generation, appearing in a short movie in Episode 326, "Lights, Camperupt, Action!".

In Magical Pokémon Journey, the second Pokémon Hazel meets is a timid and shy male Clefairy. He shrinks by using Minimize when he thinks he's threatened, however, when he does battle, his Metronome technique is very powerful. This Clefairy, along with Pikachu, reappear in the spin-off series of Pokémon Chamo-Chamo Pretty, a Magical Pokémon Journey spin-off. 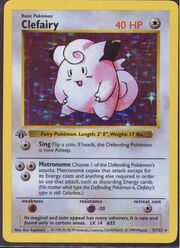 Clefairy in the Pokémon Trading Card Game (Base Set).

The Pokémon Trading Card Game is a collectible card game similar in goal to a Pokémon battle in the video game series; players must use cards (with individual strengths and weaknesses) in an attempt to defeat their opponent by "knocking out" all of his cards.[8] The game was first published in North America by Wizards of the Coast in 1999.[9]

Clefairy has had a fair number of appearances in the Pokémon Trading Card Game. It first appeared in the Base Set, as Rare holographic card, and again in Base 2, as a re-print of the former. Clefairy later appeared in the Gym Heroes (as Erika's Clefairy), Gym Challenge (also as Erika's Clefairy), Neo Genesis, Expedition, EX FireRed & LeafGreen and EX Unseen Forces sets.[10]