The name, Cleffa, is probably a shortening of the name of this Pokémon's evolved form, Clefairy. Their name may also be derived by the terms contained within it; Cleffa can be split into the musical terms clef and fa and the members of its evolutionary line are known for their singing capabilities. Cleffa's Japanese name, Py, is related to the word little. This is further supported by Cleffa's height of 1 ft.

Cleffa is a small, bipedal creature, shaped like a five-pointed star. It has no neck, so it seems to be somewhat stout compared to other Pokémon of its size, such as Pikachu. It has short pink fur, with a large brown patch on each of its two pointed ears. Between these ears is a large swirl of pink fur. It has two small eyes, no nose, and a small mouth. It also has a patch of darker pink fur under each eye.

Cleffa love to stick their tongues out and are often seen hanging around other baby Pokémon such as Igglybuff. Due to its unusual, star-shaped silhouette, when lots of meteors illuminate the night sky, sightings of Cleffa strangely increase. Some people believe that they came to the Pokémon Universe on a meteor.

If the impact site of a meteorite is found, this Pokémon is certain to be within the immediate area. On nights with many shooting stars, Cleffa can be seen dancing in a ringlike formation. They dance through the night and stop only at the break of day, when these Pokémon quench their thirst with the morning dew. Like Staryu, it is a Starshape Pokémon. As a result, scientists in the Pokémon Universe are trying to find a connection between the two.

Cleffa first appears in Pokémon Gold and Silver, as one of the several pre-evolutions introduced into the series. It is made by breeding two Pokémon besides Cleffa in the Clefairy evolutionary line. It becomes a wild Pokémon in Pokémon Diamond and Pearl.

Cleffa appears in only 3 episodes of the anime. First it was in Millennium town with the Pichu Brothers. After that one fell out of the Clefairy's space ship so Ash and his friends decided to help it. Cleffa have also appeared in "Wish Upon a Star Shape." Its final appearance came in episode 411 ("A Real Cleffa-Hanger") where it is with the Clefairy and Clefable at Mt. Moon.

In Volume 9 of the Pokémon Special manga, Cleffa is one of the baby Pokémon that escape from the Daycare Centre near Goldenrod City.

Whitney has a Cleffa as seen in Volume 12. 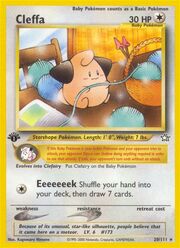 Cleffa in the Pokémon Trading Card Game (Base Set).

All of Cleffa's appearances are as a colorless type baby stage Pokémon in the following expansions: