Cloud Strife is the main protagonist in Square's (now Square Enix) role-playing game Final Fantasy VII and several of its sequels and spin-offs. His appearance is marked by spikey blonde hair, vivid greenish-blue eyes, purple or black clothing, and his Buster Sword, which previously belonged to his friend Zack Fair (who obtained it from Angeal, as shown in Crisis Core: Final Fantasy VII). At first, Cloud displays a cold and uncaring demeanor, but he gradually overcomes romantic and psychological problems and adapts to his role as a leader. 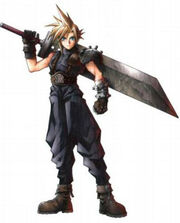 The game's character designer, Tetsuya Nomura, has revealed that the original parameters of Cloud's character design called for slicked-back, black hair with no spikes. This depiction was to serve as a contrast to the long, flowing silver hair of the game's lead antagonist, Sephiroth; however, to make Cloud stand out more and emphasize his role in the game as the lead protagonist, Nomura altered Cloud's original design to give him spiky, bright, blonde hair. It would seem that the original black hair was given to Zack instead. Nevertheless, Nomura used the concept years later for Angeal in Crisis Core: Final Fantasy VII.

Scenario writer Kazushige Nojima has expressed that the dynamic of the relationship between the player and the main character in a Final Fantasy title is something that he always puts thought into, and that with Final Fantasy VII, Cloud's subdued nature led him to write scenes with the character in such a way that the players would be placed in the position of deciding for themselves what the character was thinking. This character-player dynamic is reflected by the many opportunities the player is given to choose Cloud's way of interacting with other characters in the game's story, particularly where potential romantic-interests are concerned.

In Final Fantasy VII, Cloud is the main protagonist of the game. He is introduced as a mercenary and former member of SOLDIER. During a mission in which he worked with the anti-Shinra organization AVALANCHE, he encounters a young woman by the name of Aerith Gainsborough, who is wanted by the Turks. Cloud was born in the sleepy mountain village of Nibelheim, along with Tifa Lockhart. He grew up isolated from the rest of the village children. However, when Tifa and the others attempted to climb Mt. Nibel, Cloud followed them, Tifa fell from a bridge and her father blamed Cloud. He resolved to join Shinra's elite SOLDIER force, hoping to prove to the others that he could be as strong as the well-known SOLDIER 1st Class Sephiroth.

Early in the game, however, Cloud's past is a mystery. He claimed that he was in the village of Nibelheim when Sephiroth went berserk and massacred the local population. After finding Tifa wounded, Cloud confronts Sephiroth. Yet, when examined closely, Cloud's memories of these events and others are filled with empty plot-holes that prevent them from making sense. It all comes together later in the game. As it turns out, Cloud suffers from a mixture of amnesia and mind control. Although he had been in Nibelheim during Sephiroth's rampage, he was not there as a top ranking member of SOLDIER, but a regular Shinra guard under the command of both Sephiroth and another man named Zack. Following the incident, Cloud and Zack were captured by Shinra and experimented on with Jenova cells for several years. The two escaped but were chased down. Zack was killed after trying to protect Cloud from the many Shinra foot soldiers, Cloud crawls to Zack a few minutes before he dies. Zack barely states "Live... You're the evidence that I lived," to Cloud who answers "I won't forget," showing the two's friendship. Cloud leaves in a stupor, then is again seen on a train (just like Zack in the beginning of Crisis Core) where he exclaims, "I'm Cloud. SOLDIER 1st Class.", this is where they leave off for Final Fantasy VII to begin.

Cloud appears numerous times in the various titles in the Compilation of Final Fantasy VII. He plays a minor role in the mobile game Before Crisis: Final Fantasy VII. During the course of the game, which takes place over the six years leading into the events of Final Fantasy VII, the player encounters Cloud in SOLDIER while he is serving under Zack and Sephiroth's command. In the CGI film Final Fantasy VII Advent Children, Cloud lives with Tifa in the city of Edge. Staying with them is Marlene, Barret's adopted daughter, and Denzel, an orphan with the geostigma disease. Cloud works as a courier for the "Strife Delivery Service" that Tifa set up in her new tavern. Over time, Cloud began suffering symptoms of the geostigma, keeping his left arm cloaked from others in order to hide the symptoms. Since the end of Final Fantasy VII, Cloud grew apart from the others out of the guilt for the deaths of Aerith and Zack, and as result, he moved out of the tavern and took refuge in the old church in which Aerith once grew her flowers.

Cloud is attacked by a mysterious trio of young men; Kadaj, Loz, and Yazoo. The three are remnants of Sephiroth left behind before Sephiroth himself could diffuse into the Lifestream completely. The three begin luring and kidnapping children that possess the geostigma, intending to have the children lead them to the remnants of Jenova. Upon confronting them for a second time, Cloud finds himself outmatched by the trio and is rescued by Vincent Valentine. Cloud confronts them once again and defeats Loz and Yazoo. In confronting Kadaj, the battle takes them back to Aerith's church, where the Lifestream-infused water cures Cloud of his geostigma. Kadaj later merges with the remnants of Jenova, causing Sephiroth to be reborn. The two battle until Cloud overwhelms Sephiroth with a Limit Break attack. When Sephiroth is once again defeated, he dissipates, leaving behind a dying Kadaj in his place.

Cloud is also one of the main characters in Last Order: Final Fantasy VII. This OVA shows Cloud in two events that were shown in flashbacks in Final Fantasy VII; one at Nibelheim, and the other escaping from Shinra with Zack. In the Nibelheim flashback Cloud is seeking revenge on Sephiroth, mentioning that he used to look up to him. Sephiroth impales Cloud in the abdomen, but Cloud is able to gather enough strength to pull Sephiroth's sword further into his body so he can whip Sephiroth into a nearby wall. While escaping in a hitchhiked pick-up truck with Zack, Cloud proves to be too exhausted from the experiments performed on him by Hojo. Cloud is saved from death by Zack. The ending of Last Order: Final Fantasy VII is somewhat ambiguous, as it merely shows Zack jumping onto Cloud's body to protect him from Shinra members in a helicopter with a sniper pointed at the unconscious Cloud. A gunshot is then heard.

Cloud also appears in a small supporting role in Dirge of Cerberus: Final Fantasy VII. A year after the events of Final Fantasy VII: Advent Children]], he offers his help to the WRO in their siege of Midgar and counterattack against the rogue Shinra military unit known as Deep Ground. In Crisis Core: Final Fantasy VII, Cloud is presented as a young Shinra Guard in the employ of the Shinra Corporation. He meets Zack Fair and the two become good friends. At the very end of Crisis Core: Final Fantasy VII, Cloud is incapacitated by the experiments performed on him by Professor Hojo, and is unable to move. Whilst on the run, Zack hides Cloud and goes to face a platoon of SOLDIERs and Turks, only to be mortally wounded by them. Some time later, after being left for dead, Cloud crawls over to Zack and watches his friend die. Zack gives Cloud his Buster Sword, telling him to live his life for both of them.

In Kingdom Hearts, Cloud appears in the Olympus Coliseum world. He wears a claw and a crimson cape which Tetsuya Nomura stated are not Vincent Valentine's, but rather that the KH version of Cloud was designed in a similar "dark" style as Nomura put it, thus they will have similarities as a result. Cloud has been hired by Hades to kill Hercules, but must fight Sora as a prerequisite. After their fight, Hades sets Cerberus on Cloud and Sora, who are saved by Hercules. Cloud meets with Sora afterwards and explains that he is searching for the light he lost. Cloud appears later in the Coliseum's battle tournaments. During the credit roll at the end of the game, Cloud is shown reuniting with Aerith in the library at Hollow Bastion. In Kingdom Hearts Final Mix it is revealed that he is also searching for Sephiroth, whom he can be seen battling.

Cloud continued his role in the series in the Game Boy Advance sequel Kingdom Hearts: Chain of Memories as a boss in the Olympus Coliseum and later as a summon card for Sora. However, this Cloud is based on Sora's memory in this game. Cloud appears again in Kingdom Hearts II where he is in his Final Fantasy VII: Advent Children attire. He is searching for Sephiroth, and is himself being sought out by Kingdom Hearts's version of Tifa. Cloud fights alongside Sora during the Heartless invasion of Hollow Bastion. Should the player choose to engage Sephiroth and win the battle, Cloud returns and engages Sephiroth which ends with both of them disappearing in a flash of light.

The character of Cloud has been overall well received. IGN stated that he set a trend for RPG heroes. He was named best character of all time in Dengeki PlayStation's retrospective awards feature about the original PlayStation. ScrewAttack rated Cloud as the number two "coolest" character in their list of "Top Ten Coolest Characters". IGN listed him as a possible character in Super Smash Bros. Brawl; though he was not chosen as the "reader's choice". In one of IGN's 2007 "Hero Showdowns", Cloud was pitted against Link; Link was voted the favorite.