Cloyster is most famous because it had the highest Defense stat before Pokémon Gold and Silver were released, when it was surpassed by Shuckle and Steelix (and later by Regirock in Pokémon Ruby and Sapphire).

Cloyster are bivalve Pokémon, guarded by an extremely strong, multi-layered shell. This shells cannot be opened even by those with superior strength, and they cannot be damaged even by a bomb. Nobody has seen their dark innards (though what is seen resembles Gastly), which are Cloyster's weak spot as they are very soft and vulnerable. They launch thick, powerful spikes at enemies in battle, as well as to capture prey. These spikes are even stronger than their shell. Cloyster can also crush prey by clamping their thick shell shut onto them. When being attacked, they simply shut their shells to avoid further damage. To travel through water, they swim by swallowing water and jetting it out opposite to the direction they want to move.[1]

Their thick shells are covered in large spikes which protrude from inside the shell originating directly above their innards. Its inner-shell is a natural grey colour. A Cloyster's outer shell is purple, covered in rugged bumps and spikes with two large spikes on top. Its shells can open and close, with a hinge at the back of its body.

Cloyster fights by keeping it's shell tightly shut for protection and by shooting spikes to repel enemies.

Cloyster can only be legitimately obtained by evolving a Shellder via a water stone, and since Shellder can only be obtained in Pokémon FireRed, Pokémon Pearl and Pokémon XD: Gale of Darkness in the current games, they cannot be obtained in many games. Their availability is directly linked to the presence of Shellder, making them difficult to obtain.

As a battler, Cloyster, despite their excellent defense points, lack the ability to be used competitively because of their low HP and special defense. Due to these stats, if any "special-attacker" strikes a Cloyster, they could faint almost instantly. This is especially true if Cloyster is struck by a Grass-, Electric-, Fighting- or Rock-type attack, as Cloyster are vulnerable to them. Cloyster's ability is Shell Armor, which blocks Critical Hits (Any move has a 12.5% chance of doing double damage and ignoring any stat modifiers.)

The only way to capture a Cloyster in the wild is by using a Game Shark or other cheating device. Theoretically, if a Cloyster was obtained in the wild, there would be a 50% chance that it would have a Pearl attached and a 5% chance that it would have a Big Pearl. One could also possibly steal a Pearl or Big Pearl from a Cloyster owned by a trainer in the game (items can be stolen from other Pokémon with the Thief attack).

Cloyster also makes an appearance as one of the Pokémon available to be photographed in Pokémon Snap. In the River level they will occasionally leap out of the water, slowly spinning in the air, before splashing back into the water. They also appear in Pokémon Pinball as a part of the Blue field, and as a miniature one who sits in the left pocket as part of the process of evolving a Pokémon that the player has caught. The ball must be run up the left ramp three times for the left pocket to light-up, then shot into the pocket and into the Cloyster's shell to bring up a list of Pokémon that the player has caught during the game. Selecting one of the Pokémon initiates the Evolve 'Em mode.

Cloyster first appears in the Pokémon anime in the episode "The Bridge Bike Gang". The Cloyster, owned by a biker named Tara, battles Misty's Psyduck. Psyduck tries to Tail Whip Cloyster, only to be speared by one of Cloyster's spikes. Misty then dares it to Clamp on Psyduck's head in the hopes it will get a headache (Psyduck's headaches give it psychic powers). This ploy fails when Cloyster's grip does not produce the headache hoped for.

In Episode 62, The Battle for the Badge, Giovanni owns a Cloyster, but was kept in a room where he keeps all of his Pokémon. This Cloyster was kept in a fishtank.

Cloyster also appears in Episode 78, Fire and Ice fighting Ash's Kingler, where it uses its shell to prevent Kingler's crabhammer from working. This makes Ash worry, but Brock and Misty cheer for him and tell him to keep the battle going, since the harder Kingler hit the Cloyster, the more its HP decreased. He then makes his opponent switch to Arcanine

Cloyster also appears in the episode "The Mandarin Island Miss Match". The Cloyster belongs to Prima. It battles Ash's Pikachu. Cloyster uses Withdraw to avoid Electric attacks, but is eventually struck by Pikachu's Thunder attack. This causes Cloyster to use the Rage attack, increasing its attacking power and allowing it to defeat Pikachu with Take Down.

A Cloyster makes a brief appearance in the 9th movie.

Cloyster makes short appearances in Episode 89: The Crystal Onix, Episode 94: The Joy of Pokémon and Chronicles 18: The search for a legend.

Cloyster makes an appearance in Volume 4, Chapter 45 of the manga. Bill and Yellow are in a cave around Viridean forest where Lorelei's Cloyster is shooting his spike cannons into the cave from the cliff above. Lorelei orders her Cloyster (and her Dewgong) to attack as Pika watches from a Pokeball. Cloyster continues to shoot spike cannons, while Dewgong freezes them with ice beam before they manage to hit the roof top. In order to figure out how they are making frozen spike balls, Yellow tempts Lorelei by hanging a Pika's Pokéball on a fishing pole. Lorelei commands her Pokémon to direct another attack towards it. After retrieving the Pokéball, Yellow reads Pika's thoughts, discovering Lorelei's method

Suddenly a Poké Ball rolls from the cave, and Lorelei commands her Cloyster and Dewgong to start using spike cannons again. Yellow bursts out the cave exit and reveals that the Poké Ball was just a trick and did not contain Pika. Yellow hurls Pika at Lorelei, and it releases a Thundershock on Cloyster. Cloyster manages to protect itself before it is hit by Pika's Thunderbolt, but the horn on its head is cut off; Bill realises that neither side has been damaged very much. Lorelei, on the other hand, is very frustrated and realizes that Yellow is no ordinary trainer, as she asks for Yellow's name. 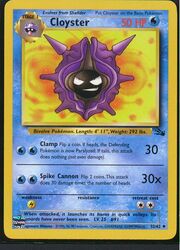 In the Pokémon Trading Card Game, Cloyster first appeared in the Fossil set; it was generally considered weak due to being a Stage-1 Pokémon, with only 50HP. It soon appeared in the Gym Heroes set, as "Misty's Cloyster". Much later, Cloyster made two appearances in the Expedition set in holographic and non-holographic forms of the same card. The non-holographic form features an e-Reader dot-code that, when scanned along fellow expedition cards Kingler, Magikarp, and Goldeen, creates a fishing game titled "Kingler's Day".

The Cloyster card in the EX FireRed and LeafGreen set is arguably its most powerful form. The card's Poké-Body reduces damage received by Cloyster by 20 HP. The card's attacks are also relatively better than the attacks of previous Cloyster cards, with less risk of doing no damage at all.