Tom Hansen is main protagonist who is former solider now in the employ of the USCG who has been sent in to investigate a mysterious Russian whaler, Eastern Spirit, in the Bering Strait.Tom is going to this ship and he don't ever now who he are against to.He going to meet a biological weapons and some mysterious creatures.Events about in that ship he meet Russian women whose father are Biological weapon himself. 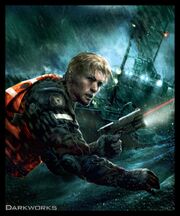 Anna Kamsky is the russian women who, Tom found in the room. She helps Tom to go on but he is looking her father too who is missing in some reason.