Command & Conquer: Generals is a real-time strategy game released by EA Games in 2003. It had a 3D engine and focused on a fictional war between America, the Chinese, and a terrorist group called the Global Liberation Army. It was followed by an expansion pack, Zero Hour 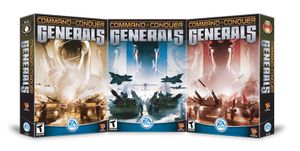 On January 17, 2003 EA announced an exclusive Officers Club pack to players who pre-order Command & Conquer Generals. This pack includes an Officer's Club medal icon that appears on the player's online persona file, an Officer's Club flag that appears on the player's Command Center when playing online, a fold-out tech tree card with all the units, vehicles, buildings and upgrades, multiplayer map strategy card featuring winning tips and tricks from the Command & Conquer: Generals development team, and a CD with concept art and movies. The Officer's Club is packed in 3 custom boxes which represents each faction.

Command and Conquer Generals operates like most other real-time strategy games, in that the player must construct a base, acquire resources, build various combat and support units, and defeat their opponent(s). Various unit types can be constructed, ranging from infantry to vehicles and air units. The player may control the United States of America, the People's Republic of China, or the Global Liberation Army, and each side has its unique characteristics and abilities. All sides share some similarities, such as training infantry at a barracks, building armored vehicles at a factory, and possessing "high tech" buildings needed to build more advanced units. All sides possess a means to acquire additional resources and funding, and all sides possess a unique superweapon.

Despite the generally positive view of China in the series, the Generals series is banned in mainland China. Throughout the Chinese campaign, the player is occasionally made to utilize heavy-handed tactics such as leveling the Hong Kong Convention and Exhibition Centre after it becomes a GLA base and destroying the Three Gorges Dam to release a flood on GLA forces. Chinese forces also use nuclear weaponry in-game, albeit restricted to the lower tactical nuclear weapon yield range.

In the beginning of 2003, a regular localized German version was released in Germany.

Due to the upcoming Iraq war, the Bundesprüfstelle für jugendgefährdende Medien (Federal Department for Media Harmful to Young Persons) put the game on index two months after the initial release, stating that the game would give underage people the ability to play the upcoming war in Iraq, before the real war had even begun.

The sale and marketing of the game were prohibited throughout the Federal Republic of Germany. Later, in the same year, EA released a new version called "Command & Conquer: Generäle", which did not incorporate real world factions or any relation to terrorism. For example, the suicide bomber unit was transformed into a rolling bomb and all other infantry were changed into "cyborgs" in order of appearance and unit responses similar to earlier releases of the Command & Conquer franchise.