The plot follows the order of China first, then the GLA, then the USA. In this order, China retaliates for a devastating GLA nuclear attack on Beijing, stops a major terrorist threat in Hong Kong, destroys the Three Gorges Dam, uses China's nuclear arsenal and eventually completely crushes the GLA cell masterminding all Pacific rim operations in Western China and its neighbors.

The GLA campaign then begins, with the organization trying to recover from its recent setback at the hands of the Chinese by raising funds from UN and American forces while instigating attacks against their American and Chinese antagonists in Astana, blowing up an American Airbase, capturing toxin bunkers and destroying a rouge GLA base with China in the way. Eventually culminating in the overtaking of the Baikonur Cosmodrome and the firing of a Soyuz rocket bearing a biological MIRV at an unnamed city at the end.

At this point the American campaign begins in which the USA engages the GLA across several locales, including Baghdad, Caspian Sea, Al Hanad, Kabara city and Northern Kazakhstan before defeating a rogue Chinese general supporting the terrorists and tracking them back to their base of operations in Akmola, Kazakhstan.

At the beginning of the USA campaign, the Global Liberation Army (GLA) launches a biological weapon using a refitted Soyuz launch station from the captured Baikonur Cosmodrome in Kazakhstan at a USA military base located in Northern Europe. The United States Army retaliates quickly, destroying the launch platform, before the GLA can fire another missile. As the campaign continues throughout Somalia at the harbour, Russia where a GLA research facility is held for both Black Lotus and Colonel Burton to destroy it and the famous airbone operation at the Amisbad oil fields in Iran, the United States learns that a GLA general codenamed "Dr. Thrax" (who was the man behind the research factory in Russia and oil funding in Iran) has been developing a more lethal variety of anthrax known as "Anthrax Gamma". When the USA locates his base of operations, they discover that he is planning to launch several missiles loaded with this toxin at major population centers within the USA itself. A swift strike by the USA, with the help of rogue GLA forces, succeeds in preventing this atrocity, and brings an end to "Dr. Thrax".

In the GLA campaign, the GLA, though disappointed by the death of Dr. Thrax by that American victory, receives a boost in morale with the successful appointment of their new supreme commander, General Mohmar "Deathstrike" (who needs to escape by plane). The GLA first attempts to reunite its splintered factions under Deathstrike's command, which it succeeds in doing after eliminating the defector Prince Kassad's forces in Egypt, who went rogue against the GLA and the Americans, and then begins a fervent mission to drive the Americans from Europe. Despite their lack of technology, the GLA succeeds in inflicting tremendous harm against the USA, by capturing an American Particle Uplink Cannon which they then use to destroy the USS Ronald Reagan (splitting him in half from starboard to port, as shown in the game's cover) and infiltrating the US West Coast to steal toxins from a chemical storage facility which the USA and the United Nations didn't notice, a wake-up call to homeland securities and defenses with GLA hero Jarmen Kell. This reaches its climax when the GLA overruns the USA’s European central command base in Stuttgart-Vaihingen, partially with the use of captured Chinese weaponry, later US technology from a UN outpost. The GLA's primary objective accomplished, they now begin to invade a vulnerable Europe and cause a new repressive state after evacuations of American forces overseas for a homeland "wake-up call" defense.

In the Chinese campaign, the Chinese People's Liberation Army (PLA) sends its army into Europe to relieve the USA and gain revenge against the GLA for their humiliating use of Chinese technology in the capture of the German military base. In order to prevent the GLA from making use of advanced USA weapons, China launches a nuclear missile at the military base, destroying it, and then sends its forces into Germany, where the GLA invaders are concentrated. After a series of devastating losses and Chinese victories in both Germany and China (their own homeland), the nearly defeated GLA takes control of an evacuated USA military base and uses its weaponry against the Chinese army. China succeeds in recapturing this base, and eliminating the GLA for good, rooting out their influence in Europe. Establishing the Eurasian Unity League with the newly liberated Europe, the world looks forward to a new era of Chinese leadership while the USA is sending forces home for defenses and security. 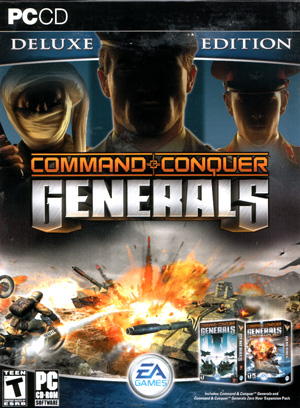