Command & Conquer: Red Alert, released on October 31, 1996, is set in an alternate universe 1950s and was originally made to be the prequel to Command & Conquer[1] establishing Red Alert as the prologue of the entire Tiberium series of games. Since then Louis Castle has said that connecting Red Alert with the Tiberium series was a "failed experiment". Red Alert introduces the Allies and the Soviets as rival factions roughly analogous to NATO and the Warsaw Pact of the Cold War. The game was received well by critics and has the highest average score of any Command & Conquer game with an average of over 90% from Game Rankings and Metacritic, unlike the title's two expansion packs, Red Alert: Counterstrike and Red Alert: The Aftermath of which both received below average reviews for the series with 63% and 70% average scores respectively. Before being re-released as freeware on 31 August 2008 by Electronic Arts Command & Conquer: Red Alert had sold over three million copies.[2]

With the release of Command & Conquer: Red Alert 2 on October 23, 2000, and that game's lack of reference to the Tiberian series, the connection established in the first Red Alert game became unclear. Opinion on whether or not the time travel events of the series were forming a separate continuity or just another side adventure on the way to the Tiberian era was divided. However, it has been implied by the original creators of the series, now working at Petroglyph Games, that Red Alert 2 takes place in a parallel universe that came about as a result of time travel experiments taking place some time into the Tiberian series.[3] Red Alert 2 was again received fairly positively with an aggregate score of 86% from Game Rankings.

Command & Conquer: Red Alert 3, released on October 28, 2008, was a continuation of the story of Red Alert 2, however the title continued the series' more "light-hearted" take on Command & Conquer. Red Alert 2 featured a Soviet invasion of North America with tanks, conscripts, gargantuan airships, and psychically dominated anti-ship giant squids; its expansion, Yuri's Revenge, escalated matters up to UFOs and communists on the Moon. Executive producer Chris Corry stated in a pre-release interview that Red Alert 3 will further differentiate the playable factions from each other and "[play] up the silliness in their faction design whenever possible."[5] This approach was seen as popular with Red Alert 3 obtaining an aggregate score of 82% from Metacritic. A stand alone expansion to Red Alert 3, Command & Conquer: Red Alert 3 - Uprising was released on March 12, 2009 to fairly poor reviews for the series with an average score of 64% from Metacritic. Another downloadable standalone game for the PlayStation 3 and Xbox 360 was released known as Command & Conquer: Red Alert 3 - Commander's Challenge which contained the Commander's Challenge mode of Uprising for consoles.

Command & Conquer Red Alert for iPad was released on October 16, 2009 for the iPad which was a continuation of the story of Red Alert 2 and takes place before the events of Red Alert 3. It contained two factions, the Allies and Soviet Union, with a third faction, the Empire of the Rising Sun, available as an in-app purchase. 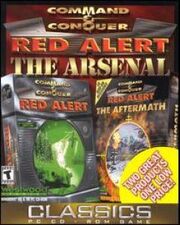