The Command & Conquer franchise is comprised of a variety of computer games released by the game developer Westwood Studios (1985 - 2003), which was purchased by Electronic Arts in 1998. In 2003, EA closed Westwood Studios, transferring staff to EA Pacific, eventually absorbing it into EA Los Angeles, where the remaining Command & Conquer titles were developed; some of the original Westwood developer team remained at EA Los Angeles, but most left to form Petroglyph Games. Command & Conquer games were originally all in one series, however, EA has expanded the Command & Conquer franchise into three series. These series' of games are officially the best selling real-time strategy games, selling in excess of 35 million units.

The first instalment of the series was released worldwide on August 31, 1995, and was simply named Command & Conquer. It was based on Westwood Studios' earlier strategy game Dune 2. The series was originally marketed to an Anglophone audience, though many of the games have been translated into other languages including German, French, Spanish, Korean and Chinese. The series is primarily developed for personal computers running Microsoft Windows, although some titles have been ported to various video game consoles and the Apple Macintosh. Some later games of the series starting with Command & Conquer 3: Tiberium Wars have also been developed in parallel for Xbox 360. Another spin-off game, Command & Conquer: Red Alert 3, was developed for Microsoft Windows and macOS, Xbox 360, and PlayStation 3.

In 1999, American game marketer and developer Electronic Arts purchased Westwood Studios. Westwood was eventually closed down in 2003 and absorbed into EA Los Angeles which has become the current development centre for the ongoing Command and Conquer series.

The Command & Conquer games belong to the real-time strategy genre, with the exception of the first-person shooter Command & Conquer: Renegade. A staple of the series is the parallel campaigns of various different factions to one central storyline. Games in the series also offered multi-player game options, via LAN and modem connection. All games in the series have also offered online play, sometimes via the now-deprecated Westwood Online software application.

All Command & Conquer real-time strategy games except Command & Conquer: Generals and its expansion Zero Hour have featured the "sidebar" for navigation and control as opposed to many other similar games where the control bar is located on the bottom of the screen.

Command & Conquer gameplay typically requires the player to construct a base and acquire resources, in order to fund the ongoing production of various types of forces with which to assault and conquer the opponent's base. All available structures of the faction chosen by the player are constructed on-site at a so-called "construction yard" - which typically begin as large-sized vehicles (usually known as MCVs, or "mobile construction vehicles") capable of deploying themselves as construction yards. When a construction yard has finished building a new structure, the player can select a spot near a pre-existing structure in order to place it, where the prefabricated building will then rapidly unfold in a distinctive manner.

In all games in the series except Command & Conquer: Generals and its expansion Zero Hour, funds are acquired by specialized "harvester" units which bring their cargo (Tiberium for the Tiberian series of games or Ore or the more valuable gems for the Red Alert series) to a "refinery" structure. This, in turn, will convert the raw material into usable resources, expressed as credits. The raw materials themselves require storage space in the form of refineries and, in the case of excess, "storage silo" structures.

All factions have structures and units with similar functions at their disposal. However, they are adjusted to fit each faction's theme and have somewhat varying properties. Units can be classified into infantry, vehicles, and aircraft, each with their own subdivisions (note: in the Red Alert series there are also naval craft available). Unit effectiveness against the opponent follows the rock-paper-scissors principle found in most real-time strategy games.

Virtually every type of structure in the series acts as a tech tree node, and additional units, structures and faction-specific abilities will become available as new structures are built and placed. Access to advanced units and abilities may be temporarily blocked if the required structures are destroyed or if they are not being provided with adequate power by the supporting "power plant" structures.

Command & Conquer: Red Alert 3 was noted for being the first RTS game to enable the campaigns to be played co-operatively online; others had only supported single-player campaigns. However, it was only possible to connect to other computers through EA's servers and not via a LAN.

While video games produced by Westwood use the proprietary Westwood Online system to facilitate multi-player games over the internet, Command & Conquer: Renegade also supported GameSpy. Games under EA's development continued to use GameSpy but dropped support for Westwood Online in favour of using EA's own servers.

Evolution of the trademark[edit | edit source]

The Command & Conquer: Renegade logo uses the same gold logo but embeds it in a background with metal texture.

The Command & Conquer 3 logo seems to combine aspects of all previous logos. The font is in the Command & Conquer: Generals long-logo style, while the words are placed vertically like in the classic variant. Also, the "&" is replaced by a "+". 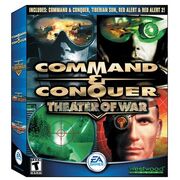 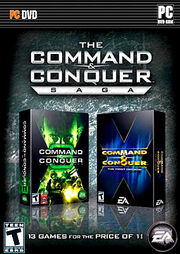 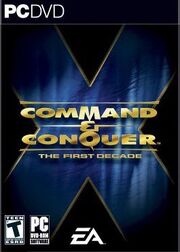 Since The First Decade's release, EA has released two patches, namely 1.01 and 1.02. Because The First Decade did not come with an auto-update program, the patches must be manually downloaded and applied. The first DVD provided game content., while the second DVCD contained five fan tributes and an interview with Louis Castle. 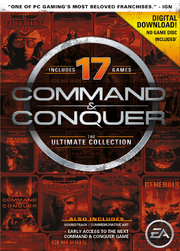 The Command & Conquer franchise has been produced by three different studios to date:

Much of the music for the series was composed and produced by Westwood Studios' former sound director and video game music composer Frank Klepacki for the early games, with composition duties being taken on by several others following the liquidation of Westwood Studios in 2003. Klepacki returned to the series in 2008, however, to assist with the soundtrack for Command & Conquer: Red Alert 3.

The music has been received positively by critics, although praise was higher with earlier entries.

The original score for Command & Conquer: Red Alert was composed by Frank Klepacki and was voted the best video game soundtrack of 1996 by PC Gamer and Gameslice magazines.[3] Among his most famous songs from the series is the theme of Red Alert, titled "Hell March", which accents the style of the game with adrenalized riffs of electric guitar, the sounds of marching feet, and synthesizers to a dramatic chant. Originally intended to be the theme for the Brotherhood of Nod faction in the Covert Operations expansion to the original 1995 Command & Conquer game,[4] the track eventually ended up enlisting itself as a staple in the Red Alert series instead, and a second version of "Hell March" was specifically created for Command & Conquer: Red Alert 2.

Command & Conquer's long history resulted in Guinness World Records awarding the series 6 world records in the Guinness World Records: Gamer's Edition 2008. These records include "Biggest Selling RTS Series", "Most Number of Platforms for an RTS", and "Longest Running Actor in Video Game Role" for Joe Kucan, who has played the part of Kane, the villainous mastermind of the series, for 15 years.