Joseph D. Kucan will be portraying Kane in the FMVs. Natasha Henstridge is cast as Alexa Kovacs and Carl Lumbly is cast as Nod Brother Marcion. Richard Taylor would again be directing the cinematics. 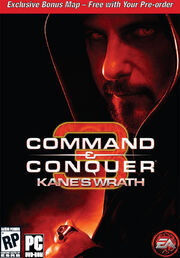 Every copy of Kane's Wrath, including the bundled Command & Conquer 3: Limited Edition, includes a code which entitles the player to enter into the beta for the next Command & Conquer: Red Alert series game, Red Alert 3, if the code is registered before September 15, 2008.

In the first act of the campaign, Kane is revealed to be in a bunker deep in the Earth's crust apparently healed of all injury save for his face mask. He instructs the commander to begin the Rio Insurrection by taking out the GDI presence in the area. After the player succeeds, Kane informs the player of his plan to reunite the Nod splinter factions. Since he cannot risk revealing himself to the world yet, he chooses Brother Marcion, the leader of the "new" Black Hand to convey Kane's will to the Brotherhood in his stead. The player is then commanded to drive Marcion out and capture him. Brought before Kane, Marcion comes back into the fold of the Brotherhood as Kane reveals himself to him, and removes his face mask, showing a completely scar-free face. Kane then orders the player to destroy a Liquid Tiberium facility as a sign to the remaining splinter factions to rejoin him.

During the second act, Kane begins to lay the plans for the destruction of the Philadelphia, commanding the player, LEGION, to steal plans for the Ion Cannon network. Since the destruction of the Philadelphia would eliminate most of GDI's leadership, Kane decides that Redmond Boyle will be his pawn and become the Director of GDI, so as to provoke the future Liquid Tiberium explosion. The player is also ordered to capture Dr. Alphonse Geraud from his research facility, explaining his disappearance in the GDI campaign of C&C3. Meanwhile, Abbess Alexa Kovacs has taken the view that General Kilian Qatar is a traitor to Kane, and plans to have her discredited by attacking Temple Prime in her guise, then leaking Ion Disruptor technology to GDI. On a mission to secure the Tacitus, Abbess Alexa launches a virus into LEGION's system and is detained by Kane. Kane discovers to his horror that Alexa attacked Temple Prime and had Kilian executed for a crime she did not commit. Alexa pulls out a pistol as she is about to be taken away for interrogation, and shoots herself, ending Act II.

In the third and final act, LEGION reawakens in the post-Tiberium War 3 period, and Kane focuses it on recovering the Tacitus. GDI has been meddling with the device, causing it to become highly unstable; Kane needs the Tacitus for his master plan, so he orders the player to first awaken the Marked of Kane, a faction of cyborgs that only LEGION is capable of controlling due to its link with the destroyed CABAL. With the successful reactivation, Kane then sends the player to recover the Tacitus from GDI's facility in the Rocky Mountains. After the Tacitus's successful capture, Kane connects it to LEGION, and the AI becomes infused with the vast knowledge of the object, ending the game in a cliffhanger.

The Black Hand: Nod's elite forces, specializing in souped-up infantry such as the Confessor Cabal, as well as an Avatar Warmech that comes with Flamethrower attachment standard. This extra firepower is at the expense of any and all stealth capability.

The Marked of Kane: A faction that have been "hand-picked" by Kane himself. These forces excel with Tiberium Technologies and anti-vehicle weapons.

Reaper-17: Themed as the heavy “shock” faction of the Scrin, with heavy vehicles and better harvesting operations. The trade-off for all of its ground power is the lack of air units, except for Storm Riders, and no Mastermind unit. There is an upgraded Gun Walker called the "Shard Walker", and the "Reaper Tripod" which converts Tiberium into extra damage in the same way the Devourer Tank can. An "Attenuated Forcefields" upgrade for Seekers and Shard Walkers is available at the Nerve Center. Another upgrade is "Conversion Reserves", which allows for Reaper Tripods and Devourer Tanks to store more absorbed Tiberium. Reaper-17 has a new structure called the "Growth Stimulator", which functions as a normal Growth Accelerator in addition to providing a steady stream of income like a Tiberium Spike. Reaper-17 Harvesters come with shields of their own. Reaper-17 also has none of the teleportation/wormhole benfits that the other two scrin factions get.

Traveler-59: The polar opposite of Reaper-17, Traveler-59 focuses on speed, teleportation and mind-control. It features new "Stalker" and "Cultist" infantry units, as well as an upgraded Mastermind unit called the "Prodigy". Stalkers are fast infantry, and have the "Agitate Tiberium" ability that damages Tiberium utilizing units or structures. Cultists have no regular attack, but can control units and structures just like Masterminds and have no build limit, but cannot take over air units. Their Mastermind receives area-of-effect mind control and a personal blink pack in addition to its old abilities, resulting in the Prodigy. Traveler-59 doesn’t get Devourer Tank units, however their Seekers are upgradable and the "Traveler Engines" upgrade give all units a speed boost. Traveler aircraft are cheaper compared to the other two Scrin factions. Because of the increase of speed, none of the Travelers units have any forcefields.