The Commodore brand was re-launched in 2007 as a manufacturer of high-end purpose-built gaming computers. The company will start selling their high end gaming PC's in April 2007. In addition Commodore has launcched C-Kins where customers can custom design their PC cover. The site is offering a library of almost 100 designs that consumers can have painted on the case of their machine. Eventually it hopes to encourage customers, artists and others to submit designs that can be painted on PCs. These designs can be changed by the consumer at any time. A spokesman for the company said there would likely be limited edition machines to go with new launches of games.

Commodore PC's will have Intel Core 2 Extreme four-core processor, a pair of 768MB Nvidia GeForce 8800 GTX graphics card and a Creative X-Fi soundcard. This is the top-of-the-line will be the Cxx, followed by the CGX,CGS, and an entry-level model, the CG. The four systems all have a C64 emulator ready installed on their hard drives along with 50 "classic" games 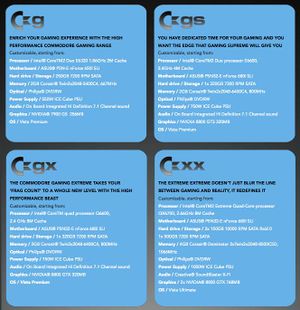