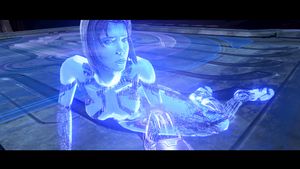 Cortana was created by Dr. Catherine Halsey, and has taken the physical appearance of her creator, though with lines of code flowing through her "skin".

Her older "sister", Kalmyia, was the first template for much of Cortana's advanced infiltration and neural programs. Dr. Halsey created Cortana to be the perfect intelligent infiltration AI. She can hack into nearly any system and can even make smaller sub-copies of herself to double for her in emergencies. She provided the Master Chief with much intel on Covenant movements and battle transmissions during the Halo campaign. Since she can be directly linked with the MJOLNIR Mark V armor, she can even upload NAV points to the Master Chief's visor.

She also helped stop the Chief from accidentally activating Halo's weapon when 343 Guilty Spark tried to mislead him into firing it by causing a cataclysmic explosion of the Pillar of Autumn's fusion reactor, destroying the Halo 04 installation.

Not long after, the Covenant found Earth by accident and began an attack with their underpowered fleet. Cortana was once again teamed up with Master Chief. Events soon led to the discovery of Halo 05, and the Covenant homeworld High Charity. Events soon led to Master Chief leaving Cortana behind on High Charity, with only the Flood overlord, Gravemind, to talk to. Cortana's current status is unknown.

Cortana, like Durandal, an AI in the Marathon games also made by Bungie, is named after a famous historical sword.