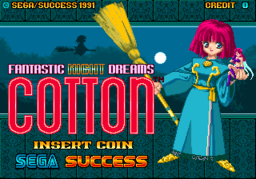 The Cotton (コットン) series is a line of shoot 'em up video game software developed by Success with a long history of releases both in arcades and on home video game consoles. With the series debuting in 1991, the Cotton games have helped to establish the visual style of shoot 'em ups sometimes called cute 'em up. Instead of warships and battle fields typical of most shoot 'em ups, Cotton games put players in control of a witch riding on a broom and tasks them with fighting through magical haunted kingdoms. Cotton games have appeared on a variety of consoles including the NEC PC Engine/TurboGrafx-16, the Super Nintendo, the Mega Drive/Sega Genesis, the Sega Saturn, the PlayStation, the Neo Geo Pocket Color, and the Dreamcast. There is also a pachinko game featuring Cotton available for the PlayStation 2. Most recently, Cotton appears as a hidden character in the Nintendo DS game Rondo of Swords.

Each Cotton game features a unique story that is loosely connected to the other games in the series. All of these stories revolve around the obsession of a young witch named Cotton with a magical type of candy called "Willow". In a typical Cotton game, Cotton will embark on her journey through the game's stages with the hope that she will be rewarded with a Willow at the end. However, when the game is over, she almost always winds up empty handed.

The character Cotton is always very childish. The amusing cut-scenes she stars in have endeared her to fans of Japanese anime. 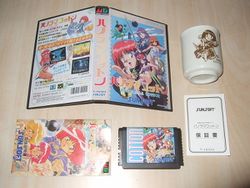 Amongst collectors of video game memorabilia the Cotton tea cups are some of the rarest pieces of collectible merchandise.
The Panorama Cotton tea cup is white with no handle and features a brown drawing of Cotton on the cup, with the words "Panorama Cotton". To obtain the cup originally, it was necessary to purchase the game and send in a registration card, before being entered into a random draw. 300 are known to exist.[citation needed]

The Cotton Original tea cup was made to commemorate the release of Cotton Original on the PlayStation. It is white with no handle and has a blue drawing of Cotton and Silk on the front, with the words "Fantastic Night Dreams Cotton Original" in the top left corner. The origin of these cups and the quantity made are currently unknown.

A Cotton 2 tea cup is also believed to be in circulation amongst collectors but its origin and quantity made are unknown.