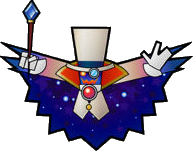 Count Bleck, who was once known as Lord Blumiere, was the primary antagonist in Super Paper Mario and uses the Dark Prognosticus and the Chaos Heart to try and destroy all of the universe. He has a past with Tippi; whom at the time was known as Timpani, the love of Count Blumeire. However, their love could not be as there were family issues so he decided to destroy everything. He has a large army that he mostly stole from Bowser, so it mostly consists of Koopa Troopas, Goombas, etc. who were brainwashed by Nastasia, his personal assistant. He also had several bosses on his side, such as Dimentio, O' Chunks, Mimi, and for a while Mr. L. He is thought to be the final boss and main antagonist in Super Paper Mario and also thought of as the ultimate bad guy but proves to have a weak spot towards Tippi. Dimentio suprises him when he finds out he has been betraying him the whole time and ends up being the final boss.

Count Bleck is first seen at the wedding in the intro to Super Paper Mario. Bleck is also seen many times throughout the game during scenes in between chapters. Count Bleck is also, obviously, seen at the end of the game as part of the final boss fight. After the fight is over, he is wounded, and then talks to his beloved Timpani one last time and is seen at the "THE END" screen with Timpani.

With the help of the Chaos heart, Count Bleck has many powerful magical attacks. Not only can Count Bleck create shields, he can also use a powerful attack that causes Mario and his party to become slower. Bleck is also known for his ability to create miniature black holes. These holes start out in the middle of the room and suck up Mario and his friends.

When Count Bleck is stationed on a platform he might use his scepter to create a small black projectile that can suck Mario and cause him to lose 3 HP.

When Bleck's Shield is destroyed,he will add a new attack to his arsenal. Count Bleck's Cape will start to glow and a huge black hole will appear trying to suck Mario and make him lose 10 HP.

Bleck will be on a platform then he will use his scepter to slow time to help him in the battle. Mario and Co. have to wait until the spell wears off and they return to normal speed.

Not an attack but is useful for Bleck. He will use his teleport ability to move to another area of the battlefield.

The Count will open his cape and dash at the player with a great speed while a glowing red aura is show during the attack causing Mario to lose 3 HP.