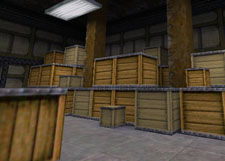 The Crate is one of the most used gameplay cliches in video games. By now, it's become a long-running joke with members of the gaming community. Crates, usually wooden, are theorized to be used extensively by developers when they run out of ideas for level design. So, to fill up any empty area, they throw in a bunch of wooden crates. Old Man Murray theorizes that if it takes you a long time to see your first crate, the game is good.

Go ahead, pop in almost any action game where you're on foot. Look for a crate. It won't take you long.

A slightly less bland (but still all too common) use for crates are block puzzles or crate puzzles. These are most often seen in Zelda games or other adventure games. Your character actually gets to pull/push these crates to solve some kind of puzzle to get through the dungeon. You probably have to use the crate to hold a switch down, or something.