Crobat (クロバット, Kurobatto) is a fictional character from the Pokémon franchise.

Its English name is based on the Japanese version of its name, Kurobatto; this may be a shortening of the word "acrobat"; or a combination of 黒 kuro, black (or cross, because of its shape), and bat.

Crobat is a purple bat with four wings, with two main wings above and two secondary wings below. Unlike its pre-evolutions, it no longer has fangs and instead has perfect teeth. However, in the 3-D Pokemon games(like Pokemon Stadium 2 and Pokemon XD) its teeth are rounded and far from perfect. Its coloring is an inverted version of Zubat and Golbat's, which have blue skin, and purple wing membranes (Its shiny form is exactly the same way, pink with green membranes, as it's previous forms are green with pink). The development of these lower wings to replace its legs, as a result of its pursuit of faster, yet more silent flight, enables it to fly fast and silently indeed, but also makes it tough to stop and rest. Its extra wings will even allow it to fly long distances by alternating which set of wings it uses when it tires. The only way it can rest is to hang on a tree branch using its lower legs to grab onto it the way normal bats would. It flies so silently through the dark on its four wings that it may not be noticed even when nearby. It uses this to its advantage when hunting prey.

This Pokémon was originally seen in the Gold and Silver editions of the game, and was carried on to Crystal, Ruby, Sapphire, Emerald, Fire Red and Leaf Green. It was an expansion of the Zubat evolutionary line. Unlike the typical evolution process (evolving at a certain level), Crobat evolves from Golbat when its happiness rating is maxed out.

Crobat is a strong Pokémon overall. It has very high speed, and the rest of its stats are either average or above. Crobat's main strength lies in its indirect damage-dealing skills. It can learn status-inducing moves such as Toxic and Confuse Ray as well as defensive moves such as Protect, Roost and Fly. These can be used to prolong its lifespan. Another move often taught to Crobat is Haze, which is used to negate any status changes that the enemies Pokémon has.

Its signature move in the games is Poison Fang which is a relatively weak poison move that has a small chance of inflicting toxic poisoning. In Pokémon Diamond and Pearl Crobat can now learn U-turn, a decently powerful bug-type attack that forces Crobat to switch out before the opposing Pokémon can attack and Cross Poison, which boasts a high critical-hit ratio and a small chance of poisoning opponents.

The appearances of Crobat in the anime have been largely of Brock's Crobat. Brock caught a Zubat very early on in the original series, and it evolved into a Golbat, and then a Crobat.

In Volume 11, Janine uses a Crobat to fight Suicune, but even her best ninja-based skills fail to defeat the legendary Water-type.

Giovanni is later seen with a Crobat in Volume 24, presumably picked up during his solo training journey. 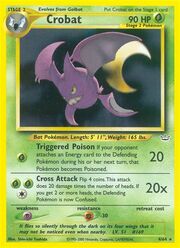 Crobat is one of the more prolific Pokémon in the card game, for it has made all the following stage-2 appearances: