Croconaw is a Water-type Pokémon that evolves from Totodile at Level 18. In the games, anime, and manga, as with all other Pokémon, Croconaw is to battle both wild Pokémon—untamed creatures that characters encounter while embarking on various adventures— and tamed Pokémon creatures owned by Pokémon trainers.

It opens its huge jaws wide when attacking. If it loses any fangs while biting then new ones will grow back in its place. This means that there are always 48 fangs lining its mouth. The tips of these fangs are slanted backward. Once Croconaw has clamped its jaws on its foe, it will absolutely not let go. Because the tips of its fangs are forked back like barbed fishhooks, they become impossible to remove when they have sunk in. This means that the prey has no hope of escape. The pattern on Croconaw's belly vaguely resembles a jungle tunic or loincloth.

Croconaw live in or around swamps. When they evolve into Feraligatr, they move into an area where there is a waterfall.

Croconaw can normally only be obtained by evolving Totodile at level 18. However, in Pokémon Colosseum it can be snagged from Mystery Troop Bluno, the trainer in blue that blocks one of the exits out of Phenac City early in the game. If you choose him, but fail, there is a second chance to capture Croconaw downstairs in the Realgam Tower.

If Quilava or Bayleef are chosen in Phenac City, then Croconaw will be available after the credits in either the Snagem Hideout or the Shadow Pokémon Lab.

Croconaw isn't available in the wild in any traditional Pokémon game. However, they are in the wild in Pokémon Mystery Dungeon in the dungeons Northwind Field and Mt Faraway, along with Pokémon Ranger, where they can be obtained in the Underground Waterways. They are also available to link in Pokémon Trozei, where they are found is in Huge Storage 2 and Mr Who's Den.

When the player completes his/her Pokédex in Pokémon Emerald, the player can choose one of three Johto starters, one of them being Totodile. Croconaw can be obtained by evolving Totodile at level 18.

Croconaw's stats are about average, with its attack and defense being its best stats.

Croconaw has appeared in a few occasions in the Pokémon anime. A Croconaw first appeared in Pokémon 4Ever, where Ash's Pikachu battled against it. Because of the battle, Ash nearly missed a boat that he was scheduled to ride. A Croconaw is also owned by Marina, a character in Pokémon Chronicles. The latest appearance of a Croconaw in the anime is in Episode 266 - Mother Of All Battles. In the episode, it is owned by a Pokémon Ranger that Ash and Friends met on Mt. Silver.

In Pokémon Adventures, Silver has a Croconaw that evolves from the Totodile he stole from Professor Elm. It later evolves into a Feraligatr. 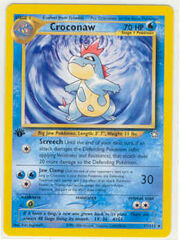 In the Trading Card Game, Croconaw has appeared on four trading cards, always as an uncommon water card.