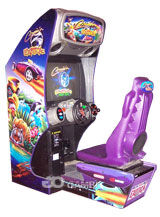 Cruis'n Exotica is a racing game that is too cool for the full word "Cruising". It's the sequel to the other arcade/N64 racers, Cruis'n USA and Cruis'n World. It's been described as a "pick-up-and-play" kind of racer. Now, "exotica" isn't a country or anything, so the track locations are fair game. You'll be racing in normally novel Las Vegas, which is overshadowed by a track on Mars itself. The multiplayer can only support four players. Beyond that, there's your standard fare of unlockable cars, tracks, and modes.