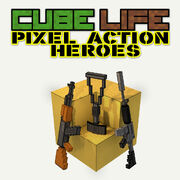 Cube Life: Pixel Action Heroes is an Action Adventure spin-off of the popular Cube Life: Island Survival for Wii U.

Cube Life: Pixel Action Heroes was released for Wii U eShop on March 30, 2017. A free demo was available for download, and the game was a huge success, outselling Minecraft and Splatoon during the first few weeks of its release.

Critics generally disliked Cube Life: Island Survival, with PureNintendo giving it a 5 out of 10, though the author stated that it may be a good game for some, just not for him. It maintains a 4 out of 5 stars on the Wii U eShop.