The name Cubone is a combination of the words cub and bone, in reference to its young age and relation to bones, both as weapons and armor. The "Cu-" may also be derived from cute, as Cubone is rather referred to as cute and lonely. Its Japanese name is most likely a pun on 空 kara (emptiness), 殻 kara (shell), and/or からから karakara (dried-up). In the English translation, it was originally going to be called Orphon, a corruption of "Orphan".

Cubone's appearance is a bit ambiguous, mainly because of the skull helmet it constantly wears, which obscures its facial features. It may resemble a Charmander since it looks very similar to one except for the skull helmet and lack of tail flame. Its body is a light brown color with a lighter colored belly. Cubone is covered in short brown fur. It has a short tail and is often seen holding a long bone in its hand. Cubone is a ground type Pokémon.

Shortly after birth, its mother inevitably dies by the hands of Team Rocket. Some have speculated that the skull is that of a Kangaskhan, which would make Cubone the unevolved baby found in the pouch. This is only speculation, however.

Cubone grows up alone, lacking a mother. After its mother's cadaver is decomposed enough, Cubone takes her skull bone and wears it over its head as a sort of helmet. It never removes the helmet again, so that its true face remains unknown to the world. This may be an effort on Cubone's part to feel its mother closer to it. In later life, Cubone constantly pines for its mother, often having bouts of depression, sorrow and loneliness. It is said to cry at the full moon because it sees a likeness of its mother in it. A Cubone's crying voice echoes around the skull helmet and comes out as a plaintive and mournful echo.

Cubone uses long bones as weapons, in the form of crude clubs. It can also wield one as a boomerang. The exact source of the bones it uses is unclear. They may either come from its mother's corpse, the remains of its prey or from the mythical "Marowak cemetery" from which Marowaks get their bones. When it evolves, the bone helmet seemingly fuses into its face. The reason for this could be that its head conforms to the shape of its "helmet", which may break when it is finished growing.

Cubone are described as short-furred mammals, with a gentle temperament.

In Pokémon Red, Blue, FireRed and LeafGreen, Cubone can be found in Lavender Town's Pokémon Tower, a cemetery for Pokémon. In these game's storyline, a Cubone's mother (a Marowak) is murdered by Team Rocket agents and its spirit haunts the Tower, which may be why Cubone is the only non-Ghost-type Pokémon inhabiting it. In FireRed and LeafGreen, Cubone is additionally found in Sevault Canyon, while in Pokémon Yellow it is additionally found in the Safari Zone. In Pokémon Gold and Silver, Cubone is found in the Rock Tunnel anytime except night. In Pokémon Crystal it is also available as a prize in the Goldenrod City Game Corner. In Pokemon Diamond and Pearl it can also be caught by talking to the female character's little sister and going to the location she tells you. Contrary to the Pokédex entries, a female Cubone or Marowak breeding in the games will not die after laying an egg. While fortunate, this creates the paradox of where Cubone's helmet actually comes from in the games. (Unless Pokémon give live births in the wild). It is also listed as the "Lonely" Pokemon.

In Pokémon Ruby and Sapphire and later versions, Cubone can come with one of two abilities, "Lightningrod" and "Rock Head". The "Lightningrod" ability draws all electric-type attacks (to which Cubone is immune) to Cubone and away from it partner in Two-on-Two Battles. The "Rock Head" ability prevents recoil damage from techniques like "Double-Edge" (one of the moves Cubone learns by leveling-up).

Wild Cubone are not found in the Nintendo 64 game Pokémon Snap. However, in the River Course, a Vileplume and its purple smog obscures a giant tree in the shape of a Cubone, and the smog will only disappear when the Poke Flute is played. This is one of six Pokémon Signs that must be photographed to gain access to the seventh course.

Cubone makes an cameo appearance in Super Smash Bros. Brawl, he stands in the background in the Pokémon Stadium 2 stage when it has been turned to the ground transformation.

Cubone has been prominently featured in three instances. One was in episode #9 (The School of Hard Knocks) where a Cubone belonging to star student Gizelle lost to Ash's Pikachu. Pikachu sought victory over the Cubone by spinning its skeleton helmet backwards, blocking its view, attacking Cubone physically, and letting Cubone's own Bonemerang smack its user, overcoming a type disadvantage in the battle. The episode is known for showing that Pokémon battles can be won and lost on abilities and tactics, as opposed to just matching up types. This type of battling has never been seen in the games, but has been emulated in the home-console incarnations.

Another was in episode #45 (A Chancey Operation), where Ash and friends had to treat an injured Cubone. Both Cubones were very sensitive, prone to crying fits.

The third appearance was in the Pikachu's Vacation feature, where a Cubone was a part of the Pokémon posse that rivalled the Pokémon of the protagonists. This Cubone seemed unaffected by the struggles of the other Pokémon.

In Pokémon Special Cubone makes a cameo in Onix is On!, part of the Red, Green & Blue chapter, battling against Red's Bulbasaur as a Pewter Gym trainer's Pokémon.

Crystal owns a Cubone, who has a star-shaped crack in her skull. Cubone's main role in the team is to take out targets from afar using her bone-based attacks. 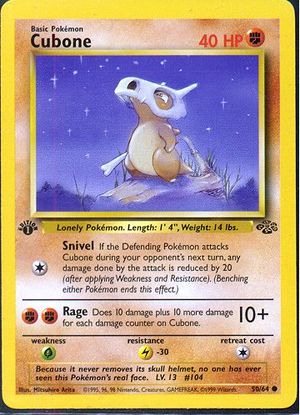 Cubone appears in the follow cards in the Trading card game