From Codex Gamicus
Jump to: navigation, search
This article is about the Nintendo GameCube game named Custom Robo. For the original Nintendo 64 game that was only released in Japan, see Custom Robo (1999).

Custom Robo, known as Custom Robo: Battle Evolution in Japan, is an action-fighting game for the Nintendo GameCube, released in 2004. It is focused on multiplayer. It is the first game of the Custom Robo series in the United States and the fourth game overall.

It took a darker approach to both the story and design with taller, sharper, Custom Robo's and moved away from the idea that Custom Robo's were children's toys. In this timeline, they were battle tools, used by everyone, from Law Enforcement to Criminals.

Battles involving Custom Robo were depicted as each player engaging in some kind of mental throwdown. The players would concentrate and a virtual arena would appear between them, with their Custom Robos inside. When one loses, they are implied to be mentally exhausted or hurt. It is implied that the commander of the CR is the CR in battle, like a suit, instead of a separate creature, like a Pokémon.

From there, the players utilize their 3 main weapons: Bombs, Guns and Pods. Bombs and Pods are generally used for cornering the enemy and covering their escape. They are usually inaccurate with a few exceptions. Guns are the main damaging point, with some close range guns doing great damage. The levels make a large difference in gameplay, by giving you a variety of areas to hide behind.

In terms of customization, in Multiplayer modes, each player gets to choose a body, a leg part, a gun, a bomb, and a pod. The leg parts determine things such as the amount of air time or running speed. The body parts determien special tackle attacks and other abilities. For example, the Peregrine body is short and runs extremely fast. The Lightning Sky body can stay in the air for a long time and turns into an aircraft like a Transformer.

The story opens with a flash back from the hero's earlier life. The main character, whose default name is 'Hero', is a child whose father has disappeared. Before his mysterious departure, Hero's father gave him a watch, telling him to keep it safe. At this point, the game leaps to the present and Hero suddenly receives a letter saying his father has just died. In honor of his father's wishes for him to become a Robo Commander, Hero sets out to do so - despite knowing nothing about robos. He eventually manages to join up with a group of bounty hunters known as the "Steel Hearts", where he met Ernest, Harry, and Marcia. A fellow member of the Steel Hearts, Harry, teaches Hero how to command robos and helps him receive his license, which allows Hero to battle with robos legally. After a few minor errands, Hero and company discover the self-guided Robo known as 'Rahu'. Later, after passing a test and obtaining a Class "S" license, Rahu's past is revealed and Hero finds out that he is a toy bot fused with an invisible organic being who had accidentally been merged with the toy.

Before the time of the domed city, the world was attacked by a powerful entity - now known as Rahu. Eventually, Rahu came to possess a child's toy. This toy was very similar to a Robo, and actually formed the basis for the concept of Robo Commanding - by popularizing Robo battling, the government gave the people a way to fight the entity. Rahu was soon damaged enough to be driven into dormancy for a long period of time, but has now awoken. Hero and the rest of the police force leave the safety of the dome to defeat Rahu again, along with the organization known as the Z-Syndicate, who are trying to control the entity for their own ends. After defeating the syndicate, Hero meets an old friend of his father's, and the brother of Marcia of the Steel Hearts,- a spy named Sergei. He originally joined the Z Syndicate to stop Rahu, but was forced to work with Oboro, who wanted to control Rahu for his own means. Eliza and Isabella, two other members of the Z Syndicate, also wanted to control Rahu. Sergei showed Hero an old recording of his father's last message to him. In the recording, Hero's father explains that he left to form the Z-Syndicate in an attempt to inform the people of Rahu's impending attack. The other members soon lost sight of his vision and betrayed him in an attempt to the seize control of the Syndicate and Rahu. Hero eventually defeats Rahu, ensuring the world's safety - for a while. 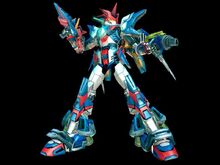 A Customized Robo. He has strong opinions on Gundams.