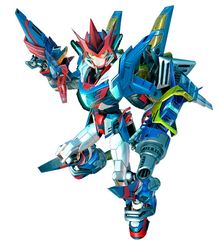 From Custom Robo on the GameCube

The Custom Robo series is one of Nintendo's lesser known franchises. It started on the Nintendo 64 with Custom Robo. This was slated for release in the west, but was soon cancelled. Europe and North America would not get a taste of the Custom Robo games until Custom Robo for the GameCube which featured a slightly darker story & setting. Overall, the series has been called a lighter, simpler version of the Armored Core games.

The games tend to focus around children and their Custom Robo's, which are small little toy robots they control with their minds. They are only 30 centimeters in size. By customizing various parts, such as their guns, bombs, body types, pod weapons and leg parts, they can make stronger Custom Robos for battling.

Although they are not playable characters, there are several Custom Robo trophies to be won in Nintendo's Super Smash Bros. Melee.