CyberStorm 2: Corporate Wars is a turn-based strategy game developed by Dynamix and released in 1998 as a sequel to MissionForce: CyberStorm. It was published by Sierra Entertainment.

CyberStorm 2 takes place long after the events of the first game, with the Cybrids no longer representing a major threat.

A jumpgate has been discovered in the Typheous system, and eight Earth corporations want to control it. Each of them therefore starts up a branch in the system, and begin to battle it out with the latest in military technology.

The game is played from a top-down isometric view-perspective. In some respects it is quite similar to MissionForce: CyberStorm, using many of the same graphical assets, although several changes to the gameplay has been made.

There are two modes of play: turn-based and real-time. The player begins by choosing which corporation they want to work for, each of which has their own strengths and weaknesses in different areas, such as finances, engineering and bioengineering as well as military capability.

The player progresses through a selection of random missions with special missions becoming available from time to time. These are written scenarios and tend to be quite profitable. The eventual goal is to take over the entire system by defeating all rival companies. 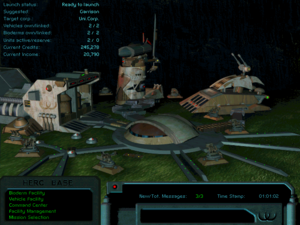 There are other changes to the game mechanics as well: the player is now responsible for maintaining almost everything, from research allocation (needed to develop new weapons and other technologies), to base construction and defenses. Essentially, the player is in charge of a subsidiary of the parent corporation.

The player must secure all income for his/her base by setting up mines, either by finding unclaimed mining areas or destroying mining operations of rival corporations. Although the player can earn money on mission rewards, steady income only comes from the number of mines that the player can keep up.

Only steady income can be allocated to research. The player determines how fast the technology levels of weapons, armor, shielding, life support, sensors, etc. will progress by allocating funds to the various sections of research and the technology level of their command building in the base. 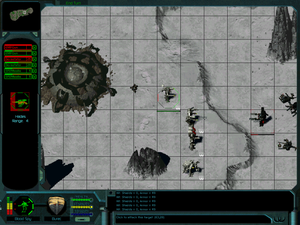 The player may command only four to eight units on the battlefield at a time (the number depending upon which corporation they are aligned with). The player's units are dropped onto the battlefield to fight either rival corporations or the occasional Cybrid group. The player has many choices of units for their force, including:

Gameplay involves destroying buildings and/or enemy units. Buildings (including turrets) are unshielded, but can have very heavy and effective armor. Enemy units have shields and armor to defend them. Typically, the player must knock down one of the eight shield facings to create a hole using weapons that are effective against shields, then use weapons that are effective against armor to finish off the unit. Alternatively, some weapons could pass through shields, either partially or completely, to damage the armor underneath.

Cyberstorm 2 mapping was based upon a grid system rather than the hexagonal one used in the first game. This gave the units eight directions of facing (four box sides, plus four corners), and shields now were octagonal in shape to work with the new map layout.