Cyberia is a science fiction action adventure video game originally released for MS-DOS in January 1994, and released two years later on the PlayStation, Sega Saturn, and 3DO consoles. A sequel, Cyberia 2: Resurrection, was released in 1995 for both DOS and Windows 9x formats.

Cyberia is set in the near future of the year 2027, five years after a global economic collapse. The world is under the dominion of two opposing superpowers, the First World Alliance in the west and the Cartel in the east. Devlin, the leader of the FWA, receives word that a devastating weapon is being produced in a secret base in Siberia, referred to as the Cyberia Complex. Curious to unravel the mysteries of this weapon, Devlin pardons a cyber-hacker named Zebulon Pike (Zak) and charges him with the task of infiltrating the Complex and retrieving intel on the weapon being produced there.

Already getting wind of Cyberia's secret operations, the Cartel seizes control of the Complex with the same goal as the FWA–to discover the nature of the super weapon being produced by a third party. Zak is scheduled to rendezvous with an oil rig run by an FWA-contracted mercenary group to pick up a TF-22 TransFighter, a sophisticated aircraft that will ensure Zak's arrival at the Cyberia Complex. The oil rig is attacked by the Cartel and the mercenaries, sensing betrayal, move to kill Zak by hunting him down and sabotaging the TF-22. Zak eventually steals the TF-22 and travels through several hostile locales en route to the Cyberia Complex; a mountain range infested with Cartel hoverfighters, a Cartel-run oceanlab, and a commuter tunnel are among the places visited by Zak. Eventually, the TF-22 reaches the Cyberia Complex and Zak proceeds to wreak havoc on the Cartel's analysis efforts. 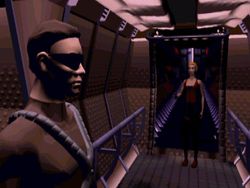 Zak being stopped by the mercenary Gia aboard a rig

While exploring the Complex, Zak encounters more than Cartel soldiers, as he is forced to eradicate the Complex scientists' experimental virus. After purging the virus from the Complex, Zak uncovers the Cyberia weapon, an amorphous collection of miniature robots, or nanites, that has achieved sentience. The sentient being informs Zak that the cyber-hacker himself is a weapon, and reveals that a large-scale explosive device has been implanted into Zak's brain. Upon reaching the Cyberia weapon, Devlin had intended to detonate the device from orbit, eliminating the weapon and killing Zak simultaneously. Zak, frustrated over Devlin's betrayal, merges with the Cyberia weapon which defuses the explosive device in Zak's head. Together, Zak and the Cyberia machine launch into space to confront Devlin in the FWA space station. The station's defenses are slowly crippled until the Cyberia machine and Zak make the final move and kill the treacherous Devlin by destroying the station. The resulting shockwave causes the Cyberia/Zak amalgamation to lose consciousness while it plummets to Earth. Upon crashing, an FWA retrieval team led by a Doctor Corbin is heard hoisting up the remains of Cyberia/Zak into a helicopter. 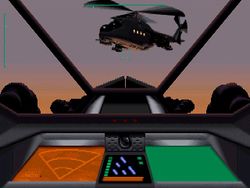 Cyberia uses prerendered visuals during gameplay, and boasted impressive graphics for its time. While mostly linear, there are two points in the game where the player makes a decision that can change important outcomes. There are four basic methods of gameplay which Cyberia employs: exploring the environment through walking (from node to node), attempting to complete puzzles in a full screen view, using a gun turret to shoot down planes, and flying in various vehicles. Direction and speed during flight are computer controlled; the player controls weapons firing. Vehicles include the TF-22 Transfighter stealth jet, a nanotech virus cleaner, "Charlie" the remotely-operated decontamination robot, and the Cyberia weapon itself.

Weapons and methods of attack are few in the exploring sections of gameplay. Attached to Zak's suit is a heat pulse weapon that can be fired from Zak's arm. The only other modes of attack during the walking portions of the game consist of traps that must be set to outsmart an enemy, which goes hand-in-hand with the occasional demand for stealth. For the gun turret portion, two heat-charged energy blasts are released from each side of the turret when Zak fires it. When flying the stealth aircraft, Zak is able to dispense continuous bolts of blue energy at the cost of the aircraft's power supply. When controlling the virus cleaner, Zak is able to do likewise. The "Charlie" robot adds a new form of attack: a weapon which kills all enemies on the screen at the cost of a decent amount of the machine's energy. A similar electrical energy weapon seen on the virus cleaner is also used when Zak is joined with the Cyberia weapon.

The various puzzles in the game can range from requiring the player to figure out the password on a computer to disarming a bomb on a stealth aircraft. Zak can use his suit's BLADES (Bi-optic Low Amplitude Displayed Energy System) to scan the current puzzle in several ways for help in completing the puzzle. The three modes of Zak's BLADES are as follows:

Puzzle difficulty and arcade difficulty are set in the beginning of the game, but setting both to "easy" is not permitted; if the player attempts to do so, the game will inform the player that it will be "too easy." Arcade difficulty controls the toughness of the combat in the game (both on the ground and in the air).

Reviews for Cyberia were generally mixed. For the most part, the game's cinematic, prerendered visuals were lauded; Philip Jong of Adventure Classic Gaming comments that "Cyberia is one of the first game titles to combine computer animations and Hollywood film technique to form visually stunning graphics and cut scenes."[1] Similarly, IGN states that the "use of multiple camera angles, eerie soundtrack, detailed light-sourcing, and short, effective cut-sequences realy [sic] pulls the player into the game."[2]

Despite the praise over the game's aesthetics, reviewers found shortcomings in Cyberia's linear gameplay. In his review, Jong goes on to criticize the game's "weak puzzles ... [that are] not well integrated into the story or gameplay."[1] He concludes by saying that Cyberia is "a classic example of beauty but no substance."[1] In IGN's words, "gameplay does tend to suffer in graphic adventures, which usually consists of doing things over and over until you do it right."[2]

Cyberia 2: Resurrection was released in 1995 for MS-DOS and Microsoft Windows as a sequel. It features the same gameplay as the original with improved 3D-rendered graphics and an increase in the amount of in-game cinematics.

The story picks up where the first game ended. After Zak and the Cyberia weapon crash land back on Earth following the destruction of Devlin's orbital headquarters, they are intercepted by an FWA team led by a Dr. Corbin. Corbin, under orders from his FWA employers, places Zak in cryo-storage and uses the remains of the Cyberia weapon to create a deadly virus called nano-toxin. Though the FWA seeks to quell a growing rebel movement with the nano-toxin, the maniacal Corbin intends to use it to kill millions and "reshape the world as we know it."

After three years in cryo-storage, Zak is thawed out by a renegade FWA major, and together the two of them set out to find Corbin and stop his plans.