Cyndaquil originates from the words "cinder" and "quill." Hinoarashi originates from the Japanese phrase hi no arashi (火の嵐). Hi means fire, flame or blaze, no is a possessive grammatical particle, and arashi means a storm or tempest. The phrase can thus be translated into English as "Fire Storm." It is also a pun on the word yamaarashi (ヤマアラシ、山荒, yamaarashi), a type of rodent resembling the Old World porcupine.

When not seen curled up, Cyndaquil are covered with dull-yellow fur with a rich streak of blue running from the tip of its snout over its head and spreading out to cover the majority of its back. There are also four spots of red fur on the back; these have special characteristics (see below). Due to its timidity, few have ever seen Cyndaquil with its eyes fully opened, so a proper eye color has not been documented, though it's eyes may be red like it's evolutions. While it is a quadruped, Cyndaquil is more than capable of maneuvering on two legs.

Though it is called the Fire Mouse Pokémon, Cyndaquil bears a closer resemblance to the echidna, porcupine or hedgehog than the mouse. Although it is not covered in physical spines like these animals, when Cyndaquil is frightened or angry, it can focus its internal energy to produce blazing "spines" of flame from the red vent spots on its back. Cyndaquil's fur is flame-resistant, as is that of the other two Pokémon, Quilava and Typhlosion, in its evolutionary line.

Cyndaquil are generally timid and not naturally aggressive, and are often seen curled into a ball for protection. This action leaves its back and special flame-emitting vent fur exposed. When predators and enemies stalk too close, Cyndaquil unleashes a furious flame from the vents as a deterrent. If provoked further, Cyndaquil will intensify its flames, creating a smokescreen that will buy it some time to escape.

Cyndaquil, like some other first generation fire types, has high special attack and speed. Its special defense and HP are decent enough also. Its attack isn't too bad either. Its fire moves are useful in places such as Sprout Tower(full of Bellsprouts and Gastlys) and Bugsy's Gym. It also has uses when fighting Pryce's ice types. Some useful moves it learns are Smoke Screen and Flame Wheel, and Swift, and Earthquake can be taught to it later on. Later on, when evolved into Typhlosion, it can be a very good sweeper.

In Pokémon Gold, Silver, and Crystal, Cyndaquil is one of the three starter Pokémon available (the other two are Chikorita and Totodile). It is categorized as the "Easy" setting of the game. In Pokémon Emerald, it is one of three choices as a gift from Professor Birch for completing the Hoenn Pokédex. In Pokémon Ruby, Sapphire, FireRed, and LeafGreen, it can only be obtained through trading. It is impossible to obtain in Pokémon Red, Blue and Yellow. In Pokémon XD: Gale of Darkness, completing Mt. Battle in Story mode allows the player to obtain a Cyndaquil with Blast Burn, an extremely powerful Fire-type attack that is otherwise exclusive to Charizard. Cyndaquil is also one of the sixteen starters in the Pokémon Mystery Dungeon games.

Cyndaquil has below-average statistics in all categories, and so is generally ignored in competitive gameplay for its evolved forms. It evolves into Quilava at level 14 and Typhlosion at level 36.

Cyndaquil appears in Super Smash Bros. Melee as one of the Pokémon in the Pokéball item. When it comes out, it flips into the air and hovers, unleashing a close-range flamethrower attack similar to the Fire Flower. It is also a collectible trophy in the game.

Cyndaquil has made numerous appearances in the Pokémon anime, mostly under the control of Ash. His Cyndaquil often seemed to be very weak in comparison to his Chikorita and Totodile, and very shy. At first, it needed time to warm up and use flamethrower, but with some training from Ash, it is now able to use its flamethrower whenever it wants. (i.e. in the battle against Jasmine of Olivine City).

Cyndaquil first made an appearance in episode 119 - Don't Touch That Dile. Ash and another trainer compete to catch a Cyndaquil. Ash ends up winning when he saves Cyndaquil (and himself) from an avalanche/a huge hill off a mountain pass by putting Cyndaquil in one of his pokeballs unintentionally. Even though Ash caught Cyndaquil, the other trainer battled Ash for it; Ash won. Ash used Cyndaquil many times in Johto, including a gym battle with a Steelix, in which Cyndaquil won. He also used it in the Johto League against Jackson's shiny Magneton, but lost. Cyndaquil is currently at Professor Oak's lab since Ash decided to make a fresh start when going to Hoenn, and therefore, left all of his Pokémon, except Pikachu, with Professor Oak.

In Pokémon Adventures (aka Pokémon Special) Gold took the Cyndaquil from Professor Elm's lab to try to catch the thief Silver. He named the Cyndaquil "Explotaro" for the explosive fire from its back. 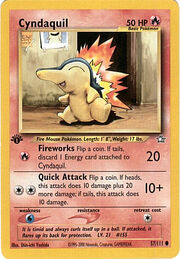 Cyndaquil has an impressive number of Basic fire-type cards under its name: