D'ni numerals are the base-25 counting system used by the D'ni in the fictional Myst franchise computer games and also in Cyan's related Myst novels.

A significant part of the Riven endgame is inaccessible until the player has deduced the meaning of the symbols as numerals and deciphered their values by playing with a mechanical game in a schoolhouse. The meanings of numerals one through eight are presented much more straightforwardly in the Relto Age in Uru: Ages Beyond Myst. The numerals also appear in the games Myst III: Exile and Myst V: End of Ages, although learning them is not necessary to complete those games.

Though it is a base-25 numeral system, all numerals are derived from five basic glyphs. These glyphs unaltered are the "basic" numerals 0, 1, 2, 3, and 4. The numerals 1, 2, 3, and 4 are rotated ninety degrees counterclockwise to yield the "rotated" numerals 5, 10, 15, and 20, respectively. (Rotating the basic numeral, therefore, multiplies its value by five; this principle of Fives misleads many to believe that D'ni numerals are base-5.)

Higher numbers are derived as in any other place-value system. Digits are appended to the left, each representing a higher power of 25, with the zero numeral acting as placeholder.

There are two additional numerals, which are cultural symbols and not members of the positional system described above.

The first is a single-digit 25 (an 'X'-shaped glyph). The D'ni used numbers to show degrees of extent or completeness (much as we use percentages). 25 represented utter completeness or the greatest possible extent. For instance, then, if a D'ni were extremely lonely, he might say he was "lonely to 25." This use of 25, along with 25's general ubiquity in D'ni culture, made it expedient to have a single-character representation of the number.

The other is a "cyclical zero" (a forward slash-shaped glyph). It was used in circumstances where numbers progress in a cycle, with the beginning tied to the end. Their clocks, for example, divided D'ni "minutes" into 25 D'ni "seconds." The first second of a minute was represented not by a typical 0 or 25, but by the cyclical zero, representing both the end of one minute and the beginning of another. (The idea came from an incorrect single-digit 25 in the D'ni font Cyan used in Riven; the "cyclical" explanation was posited after the game's release and was adopted by Cyan thereafter.) 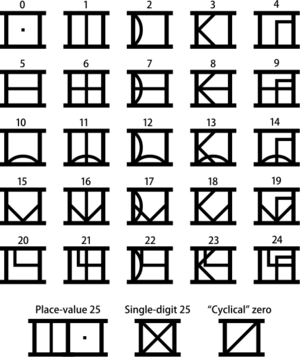