DOOM 3 is a First-person shooter released in 2004 by id Software for the Microsoft Windows, later re-released for the Xbox in 2005. Runs on the DOOM 3 Engine. It is a retelling of the story of DOOM. An expansion pack, DOOM 3: Resurrection of Evil was also released in 2005 but was developed by Nerve Software. 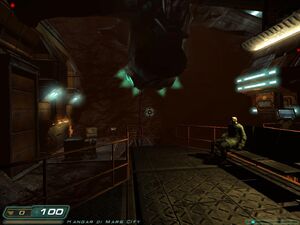 On the Xbox version through Xbox Live there is a Co-op mode. Simply set up a room and choose whatever level you want to start on. There is no ability to save, if both of you leave the game you will have to select whatever level you left off at and start at the beginning. There is no PDA in Co-op. When one of the players dies a backpack with all his equipment is dropped and that player is respawned at the start of the level with only a pistol and must catch up and retrieve his backpack. The backpack does have a faint glow so it's fairly easy to locate in the dark. All the cut-scenes play without taking over the characters like in the single-player.