Sony (SCEE) and the creators of SingStar bring worldwthumb|300px|rightide success in late 2011 Dancestar Party. This is an exciting new dance game to be released exclusively for PlayStation 3 and which, thanks to PlayStation Move motion control two players dance and will unleash their musical creativity as their favorite. In Dancestar Party players can dance hits of 40 national and international artists taking advantage of the precision and ease of use of the PlayStation Move motion control. Can practice and learn 4 different choreographies per song with variable levels of difficulty, accessing and dance routines to 160 in total. All steps will recreate every detail of the original video clips of each artist to capture their movement and energy. In addition to Dancestar Party players can sing while dancing to feel like real stars of music, so everyone will have fun with Dancestar Party: either dancing, singing or just looking.The game includes fun features such as 'Dance Partners' with which the player can create original choreographed dance with friends at any time with the precision and accuracy offered by PlayStation Move, or 'Live Feed', an application to know who has mastered the dance floor at the last session. Also include a new function 'training' with a calorie counter to record the progress made as part of a weekly exercise regimeAll actions can be saved and shared online community both Dancestar Party as social networks. Dancestar Party will be ideal to enjoy with friends, compete with family or alone explore all the talent that each player has inside.The SingStar experience was just the beginning, now he plays is to move the hips and reach the status of pop star. 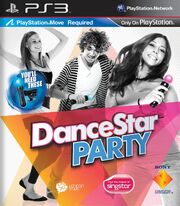