Dance Praise 2: The ReMix is the sequel to the award-winning Dance Praise dancing video game. Up to 4 players can play, and this game now includes a variety of colorful 3D backgrounds and dancing characters. It supports Dance Praise dance pads without any configuration required, and third-party dance pads can be mapped to be used with the game by installing a separate patch. 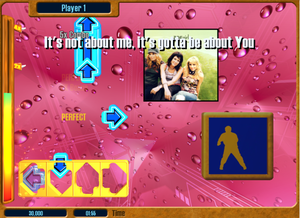 About You by ZOEgirl is being played. 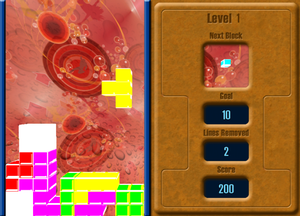 The DanceTris mini-game is included and played using feet.

Along with its higher system requirements, Dance Praise 2: The ReMix brings new features not found in the Original Dance Praise.

The new interface included customizable animated backgrounds which can be seen during gameplay, and dancing characters. Both can be seen in the screenshot on the left.

Dance Praise 2: The ReMix can use the dance pad not only for dancing, but also for mini-games. Similar mini-games can be found in Dance Dance Revolution Mario Mix. The game "DanceTris" is included, and a screenshot can be seen on the left of this paragraph. In addition, it is possible to obtain additional games, such as "Simon Says" and "Rock n' Block", by respectively installing the Contemporary Hits and Top Hits expansion packs.

Dance Praise 2: The ReMix includes 52 new songs from 48 different artists, and can use songs from expansion packs and the original Dance Praise, provided the user has a copy of those products.[3] It can also play the songs available in the free add-on.

The "Original Dance Praise Expansion Pack" is not an actual expansion pack, but simply a retail version of the original game.[4]