Dark Cloud is a RPG developed by Level-5 and published by Sony. Dark Cloud has a sequel, Dark Cloud 2. 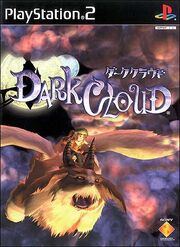 Two great continents, one an advanced civilization driven by progress and technology; the other, where nature is the center of all existence and everyone lives harmoniously side by side. Two cultures that have never had contact with each other... until now. An ancient evil has been unleashed; journey on a quest through time to unravel the mysterious tale of the Dark Cloud.

An ancient book tells of a quiet boy, a malevolent power, and a world destined for destruction. With everything gone, that unassuming boy soon finds that the world he knew can only be restored in one way. He must rebuild it himself... one person at a time.

The player's task, as Toan, is to rebuild the destroyed cities using the Atlamillia given him by the Fairy King, and eventually defeat an ancient evil, the Dark Genie.

The game alternates between dungeon exploring and city building. In the dungeon exploring portion, Toan proceeds one floor at a time down to where the boss monster is located. Along the way, he fights with various creatures and uses the Atlamillia wrist band to collect Atla, which he can use to rebuild a city one part at a time. The player must listen to clues as to how the city should be rebuilt, since this can provide either a help or a hindrance to Toan as he further proceeds downward into the dungeon. Toan also acquires new companions that he can use along the way, even on floors where Toan can't be used; however, only Toan can collect Atla.