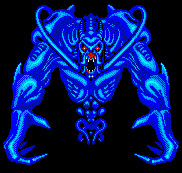 Dark Force as it appears in Phantasy Star

Early in the game, Alis Landale and her companions have a first glimpse at Dark Force in a nightmare, in the form of an enemy aptly named Nightmare (ナイトメア, "naitomea"[2], renamed "Saccubus" in the American version). It is almost impossible to beat, and upon defeat of either side, the characters will believe it to be just a bad dream.[3]

Dark Force is ultimately defeated by Alisa in AW 342. In AW 349, after conducting more research into the origins of Dark Force, Lutz (Noah) finds that the gate La Shiec opened cannot be completely sealed, and that the fluctuations in the seal will cause it to temporarily weaken 1000 years after it was sealed. Because of this, Lutz assembles the other Espers to what will come to be called the Esper Mansion on Dezolis. He enters into an artificial sleep, leaving instructions that allow the other Espers to create the Nei weapons (and Elsydeon) so that future generations will be able to effectively combat Dark Force when the seal is broken.

Dark Force as it appears in Phantasy Star II

The game begins with Eusis (Rolf) describing his nightmare, in which Alis is seen battling Dark Force. In AW 1284, after a series of events that bring the characters to the Earthmen's space fortress, Noah, Eusis opens the Pandora's Box, where Dark Force has been residing so that it might influence the Earthmen (and with them, Mother Brain). Dark Force is defeated once again, but not before it succeeds in manipulating the Earthmen to destroy the planet Palma, greatly weakening the seal on the Profound Darkness.

Dark Force as it appears in Phantasy Star III

After the events which resulted in the destruction of the planet Palma in AW 1284, it is discovered that the Palmans had evacuated their planet before it was destroyed. The population escaped in a fleet of 400 worldships, but Dark Force secretly pursued the fleet and destroyed all but three of the ships that didn't land on Motavia or Dezolis (the Alisa III, the Neo Palm, and an unnamed ship that malfunctioned while attempting to land on Motavia). When he boarded the Alisa III, he provoked a conflict between the Orakio and Laya clans. When Orakio and Laya realised that they had been manipulated by Dark Force, they joined forces and managed to trap Dark Force. However, the conflict continued for 1000 years.

In AW 2286, the Orakio and Laya clans finally put their differences aside, and learn that their true enemy is and always has been Dark Force. Dark Force is eventually found to be possessing Orakio's thousand-year-old twin brother, Rulakir, who is king of the hidden city of Lashute. After subduing Rulakir, the possession ends and, with his dying words, Rulakir tells the party to defeat Dark Force.

Taking advantage of the weakened seal that resulted from the destruction of Palma in AW 1284, the Profound Darkness manifests as Dark Force for the final time in AW 2284. This time, it attempts to break the seal and emerge from its prison, but its plans are thwarted when the fourth planet, Rykros, is rediscovered, along with the secrets to destroying the Profound Darkness.

In Phantasy Star IV, Dark Force appears four times, but can only be combated on three of those occasions. With each appearance, Dark Force has more hit points and abilities than it did before, making it a successively difficult opponent.

When the party face the first antagonist of the game; the dark wizard Zio, he casts an invocation called "Nightmare" summoning Dark Force's visage behind him. The party quickly discover to their horror that their attacks are completely ineffective against their opponents demonic aura. Dark Force then spews his "Black Wave" attack, gravely injuring one of the party members and they are forced to retreat. It is not until later the reformed team face Zio again with the aid of Rune Walsh, whom with his newly acquired Psycho Wand, is able to shatter Zio's protection and they are able to vanquish the mage.

After Zio's death, Dark Force is found to inhabit the control room of the Kuran artificial satellite. Upon entering the room, the party sees Dark Force has infested the main control terminal allowing it to utilise the systems weaponry, making it impossible for them to access the climate controls without first driving the creature off.

The source of the Black Energy Wave becomes obvious when Dark Force is found on the seventh floor of the Garuberk Tower on Dezolis.

Masquerading as an archaeologist named Seth, Dark Force joins the party in order to explore the Soldier's Temple on Motavia. Seth is a great asset in the Island Cave, providing some unique abiltities (Deathspell and Corrosion) to aid the party. However, once the party obtains the Aero-Prism and exits the temple, Seth reveals his true identity when he transforms into Dark Force.

With the barrier between dimensions opened, a massive hole appears in the world, from which Dark Force's true form will emerge: the Profound Darkness. The party travels to this rip and encounters Dark Force's true form. Initially a shapeless mass of darkness, it first forms a hideous mass of eyes, teeth and limbs. It then becomes a nightmarish insect before assuming its final form, a vast and all-encompassing dark goddess. The party defeats this entity, resulting in the absolute destruction of the millennial cycle in which Dark Force makes its appearance.

In the game's final level, the Profound Darkness' dimensional prison, the heroes may randomly encounter a powerful enemy called "Prophallus". This special monster only ever appears one at a time, and is identical in appearance to the version of Dark Force seen in the original Phantasy Star. Presumably, these are additional manifestations of Dark Force the Profound Darkness sends at the heroes prior to their confrontation with it.

During the final area, Ruins, it is revealed that the character Red Ring Rico reached Dark Force and became the creature's new host. At the end of the Ruins 3 area, the player (and his or her party) are transported to a field with a monolith in the center. Approaching the monolith releases it and begins the battle.

In Normal Mode, the fight has three stages in which you must battle Dark Falz, Hard and above have four.

First Form: After the monolith is activated, the lucid field turns into an arena of chaos, with screaming faces on the ground and a desolate atmosphere. Floating spiked structures rise from the ground and immediately begin to cluster around the players. Once a set number of spikes have been defeated, Falz will shift out of this form and begin the next.

Second Form: In this form, Falz appears as a large creature with two arms, and a large, 3-headed, moving mass as its lower half. Once the main body has taken enough damage, the game will shift into a short cinematic to show the shift into the third form.

Third Form: In this form, Falz abandons the lower mass to reveal the form found in the picture attached to this article. It will float around the outside of the arena, eventually stopping and starting again to allow players to hit it and/or chase after it. Once this form is defeated, Normal mode players will have completed the episode, while those on a harder difficulty still have one form left.

Final Form: This form does not appear in Normal difficulty. Falz abandons the corpse of its previous form and appears in its true form. The players are transported to a new arena, a large ring with a hole in the center where Falz stays the entire battle.

After SEED-Magashi escapes and the player reaches The HIVE, Magashi re-appears and is defeated once more by Ethan Waber. Just as Ethan and his friends are about to escape The HIVE before the Alliance Military Force's attack, Magashi rises one last time as Dulk Fakis.

A creature similar to Dark Force is the final boss of Phantasy Star Universe. However, its name is actually a bit different. While all past incarnations of the beast in classic Phantasy Star games have been rendered in the Japanese games as ダーク・ファラス (Daaku Farasu), this particular one is named ダルク・ファキス (Daruku Fakisu). In the English version of PSU, the name is translated as "Dulk Fakis," leaving one to wonder if this entity is truly Dark Force or not. His level varies depending on Ethan's level, and is fought using Ethan Waber, Karen Erra, Leogini S Berafort, and Tonnio Rhima for Story Mode. His initial form looks similar to what has been seen in the classic Phantasy Star games, fought inside The HIVE. The second form looks much different and is battled in an area somewhat similar to where the final form of Dark Falz is battled.

First Form: Dulk Fakis will position himself at the end of a platform while unleashing several powerful attacks. Each attack can be identified by the color of the energy he creates beforehand. The most devastating likely being the blue colored attack, which creates a large wave of power that will sweep Ethan and company away and into the wall.

Second Form: Dulk Fakis rises up and shows his full body while the battleground is transformed into a flat, circular plane apparently above the Guhral System, as the three planets, Parum, Neudaiz and Moatoob can be seen in the background. Dulk Fakis battles with one appendage which has a strange serpent-looking creature at the end of it. During this battle, Dulk Fakis will conjure up an extremely powerful attack which will bring most players down to just a small amount of health.