Darknut タートナック is a fictional armored knight enemy that appears in The Legend of Zelda series of video games.[1] Typically, the thick armor and sturdy shield of a Darknut renders it nearly invulnerable from the front, forcing Link to circle around and strike it from behind.

Darknuts are very similar to another Zelda enemy, the Iron Knuckle. In the Japanese versions, Darknut is called "タートナック" (taatonakku) which is noticeably similar to the Japanese name of Iron Knuckle, "アイアンナック" (aiannakku). It is apparent these two enemies are related, especially in the first two Zelda games, in which they shared similar designs and purposes.

The Legend of Zelda[edit | edit source]

In the original The Legend of Zelda, the Darknut's seemingly random movement and high damage capability make them a significant obstacle. The challenge is only compounded by the fact that they frequently appear in groups. The original Darknuts are monsters that attack in the traditional manner of attempting to touch Link, but are much more difficult to fight than other enemies with this attack pattern since they can only be damaged from the side or the rear. Their armor also renders them invulnerable to projectile attacks. Blue Darknuts have double the offensive and defensive capabilities and can move faster than the red ones.

A Link to the Past[edit | edit source]

The Castle Knights can be considered this game's version of the Darknuts, only they are not exactly monsters, but the knights and guards controlled by the magic of the evil wizard Agahnim. In the beginning of the game there are gold version holding shields that are friendly to Link, with one of them pointing out that they are slowly being brainwashed. The colors of their armor vary from green, blue and red and their difficulty increases in that order. Green Soldiers are sometimes armed with daggers rather than swords and sometimes use bows whilst hiding in bushes, Blue Soldiers use swords or bows and Red Soldiers use spears. Stronger than the normal guards are Knights, which wear different helmets and are somewhat stronger. Red Knights can use bombs and throw spears. The strongest type of guards is the Ball & Chain Soldiers, which come in Silver and Gold varieties. At the end of the game they are seen normal and unmasked.

They next appear in Link's Awakening, as much weaker versions of their past selves. These are called Soldiers in the English version, but their Japanese names are still Darknuts. They attack with swords, shields, and arrows.

Oracle of Seasons and Oracle of Ages[edit | edit source]

Darknuts in Oracle of Seasons and Oracle of Ages appear the same as in Link's Awakening.

In The Wind Waker, Darknuts are much slower and more intimidating, carry armor differing in design and color in order to denote rank. The weakest Darknuts wear silver armor and carry only a gigantic greatsword, while the highest-ranking Darknuts wear black or red armor with a cape, a stylized helmet, and a shield. Unlike being a mini-boss in most games, Darknuts in the Wind Waker appear as a semi-common enemy in the 2nd half of the game. 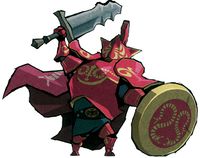 Darknuts can be stripped of their armor through well-placed attacks, counter-attacks, and use of the Grappling Hook or Fire Arrows. Once its helmet is removed, the Darknut's face is shown to resemble that of a wolf or a jackal. The Darknut's greatsword can be taken by Link and used as a powerful (even if clumsy) weapon, which can even break certain stone pillars. Darknuts will attempt to pick up any available weapons if they are disarmed. If no weapons are available, they will continue to attack with their bare hands, and are apt to dodge attacks if their body armor has been removed. These Darknuts easily break out when frozen by the Ice Arrows, though Link can still shatter them with quick use of the Skull Hammer. They occasionally use a move similar to Link's jump attack, which will take off a whopping 3 hearts if it connects. They drop rare "Knight's Crests", proof that they are advanced enough to perform the "Hurricane Spin".

Darknuts (rendered "Dark Nuts" on their figurine) occasionally appear as sub-bosses in The Minish Cap. They appear like their The Wind Waker counterparts, but removing their armor is neither possible nor necessary. All normal Darknuts wear white armor (with either green or red trim), carry shields, and can only be harmed while opening its guard or by being attacked from behind. They attack either by slashing, performing a dashing stab, or using a charged unblockable stab. The game also contains a slightly stronger red-armored Darknut named "Red Dark Nut" and a black-armored Darknut named "Black Knight", who is the strongest Darknut and is faced in the final dungeon. Black Knight first attacks by itself, and later along with two Red Dark Nuts. 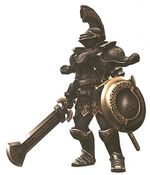 A Darknut first appears as a mini-boss in the sixth dungeon, the Temple of Time, in Twilight Princess, and later as a high-level enemy. They are differentiated by the shade of their armor, coming in black, red, blue, copper, silver, and gold varieties. They are also found in the Cave of Ordeals, as well as Hyrule Castle. They are also very tall, being roughly twice the height of Link.

Like in The Wind Waker, Darknuts are well-armored, and lose their armor as Link lands hits on them. Bombs are also effective at removing their armor, particularly on groups of them (though the bombs are useless once the armor is completely gone). They are armed with either greatswords (though used with one hand) or giant maces, accompanied with a shield. This shield is very potent and can fend off any of Link's attacks and all of his weapons. Once its outer armor and shield has fallen off, the Darknut throws its weapon at Link and unsheathes a smallsword. Unarmored Darknuts are highly adept at blocking Link's attacks, although certain powerful techniques can beat down their guard. Later in the game, in Hyrule Castle, the player can choose to fight two of these foes at once, both wielding mace. Darknuts have arguably the best A.I. in the entire game, as they can block or dodge nearly every attack, even sidestepping Bomblings in their armorless state, while dealing swift counterblows. At the final floor of the 'Cave of Ordeals' (Found in Gerudo Mesa) Link must fight three of these enemies at once (or four when completing the Cave for a second time), which can only be accomplished by very experienced players.

In the Temple of the Ocean King, Bellum, the primary antagonist, uses some of his power to create Darknut-like creatures called Phantoms which are invulnerable to all weapons, save for the legendary Phantom Sword and Hero's Bow, but the bow will only stun it temporarily. At the game's climax, Bellum possesses Linebeck and turns him into a sword-wielding Phantom, whom Link is forced to fight. The possessed Linebeck behaves quite similarly to Darknuts in past games, slowly advancing toward Link and blocking most of his attacks. Its own moves are extremely powerful, but it shares the same weakness as its Phantom cousins, namely the eye on its back.