The game was be ported to the PlayStation in 1996 by Psygnosis and again later to the PlayStation 2 in a bundle titled Vampire: Darkstalkers Collection which featured the first three main entries to the series as well as alternate versions of those titles. 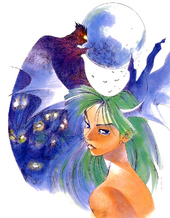 Characters in Darkstalkers can also dash forward or back-step. Some dashes have special properties. Morrigan Aensland can dash upwards at an angle while Demitri Maximoff turns slightly invulnerable. Anakaris can dash backwards from the edge of the screen to the other. Lord Raptor has the ability to walk forward while crouching.