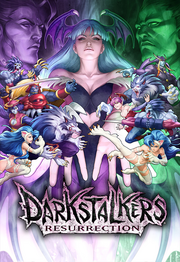 Darkstalkers, known as Vampire in Japan, is a fighting game series created by Capcom. The series includes three games with several upgraded titles and compilations. Like many other Capcom fighters of the time, Darkstalkers plays similarly to the Street Fighter series.

In October 2012, during New York Comic Con, Capcom announced they would be releasing an HD remake bundle of Night Warriors: Darkstalkers' Revenge and Vampire Savior. Titled, Darkstalkers Resurrection, the game was released March, 12th on PSN and on Xbox March, 13th. It features on-line play and spectator lobbies as well as additional unlockables.

Many of the characters received name changes when the series was brought over to the west.